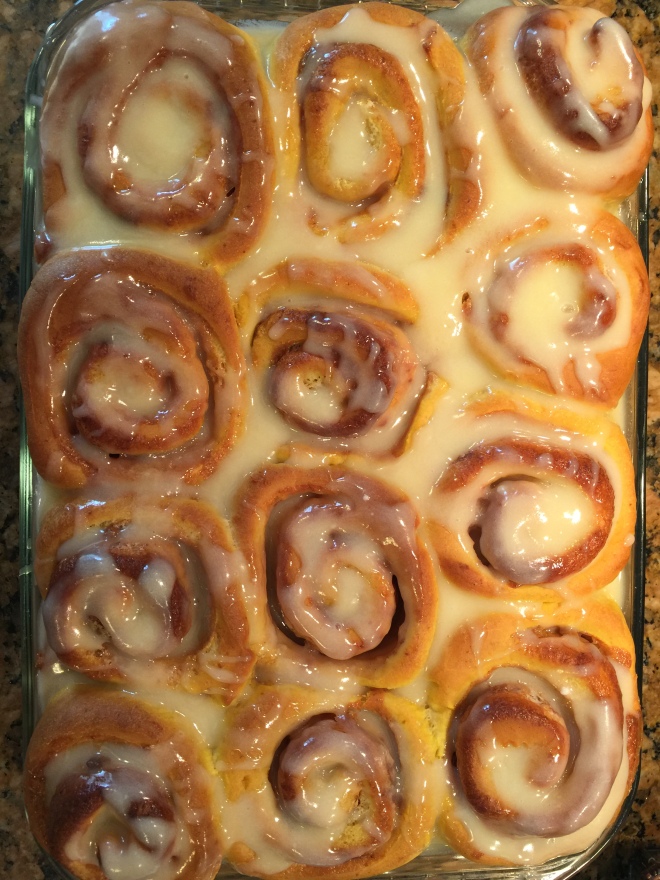 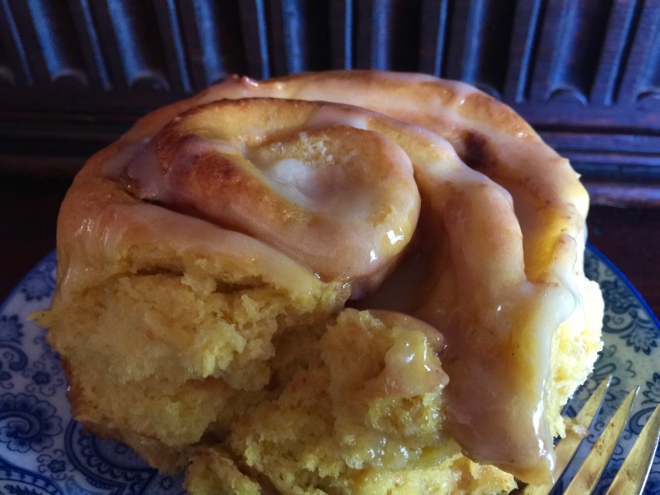 These Pumpkin and Dulce de Leche Cinnamon Rolls are the stuff dreams are made of.  They are a twice a year indulgence.  These are the cinnamon rolls you fantasize about serving Christmas morning but are too exhausted from all the hustle and bustle to actually make them.  But I’m going to tell you how you can.  Huge, soft clouds of sweet golden dough are perfect to sop up the rich caramel sauce and barely tangy glaze.  I don’t know what made me want to make them.  I enjoy baking; I love working with dough.  But I’ve got to tell ya, I had to make these over and over again.  Without thinking I dumped cup after cup of flour into the mixer bowl and suddenly thought, “Wait…how many cups was that?”  Into the garbage went butter, egg, sugar and who knows how much flour.  Now, you can buy ready-made dulce de leche but let’s at least start out with homemade.  Over and over I’d realize mid-way through baking the caramel that I had forgotten to cover the pan tightly with tin foil.  Or I forgot to put the pan with the condensed milk into a larger pan filled with water.  Or I just plain forgot what time I put the pan in the oven and cooked the milk way too long and, again, had to trash it.  I didn’t remember the butter chunks had to be added to the top of the rolled out dough until the pans had been baking for a good 10 minutes.  It went on and on like this.  What could be so important that I couldn’t count 5 cups of flour?  My boy.  That’s what.  My boy will be 25, twenty-five tomorrow.  How did that happen?  I’ll tell ya how.  We blinked.  Yesterday I was yelling at him that if he made me late for work ONE MORE TIME I was going to leave him at home and he would have to take a cab to grade school.  A cab.   When he was six.  As if.  Now he leaves for work in Miami and takes the early train, never late for that!  Nuh uh.  So the years have sped by…flown by actually.  I’m certain all parents feel this way but when he was born we knew he was special.  And there was nothing, NOTHING, I wouldn’t do for that boy.  When it was snack day for us in Pre-K I agonized over what I would bake.  Lemon muffins with a key lime topping and seedless grapes?  Or would chocolate chip granola bars and apple slices be better?  And I know some of his classmates parents thought we were the meanest parnts on the panet.  We didn’t take him to Disney World until he was in, I don’t know, first grade?  Awful, huh?  No video games in our house, either.  No, tennis, baseball and friends were priorities.  And reading.  Jimmy and I would get our cocktails and we took turns reading out loud to James.  We read fabulous British and French story books, hooting and hollering all the while at the atrocities committed.  Pirate fights, naughty children getting spanked and the odd child losing both parents at sea to be reunited months later in a Paris bistro were our favorites.  Jimmy had James surfing the web at two years old.  Our boy was expected to participate in the oratorical competitions at church…all of them.  As a result he grew up relaxed and comfortable speaking before large groups of people and, to this day, holds his own quite well in all social settings, from the homeless shelter to Harvard’s Kennedy School.  James embraced his Greek and Puerto Rican roots even when some of his classmates ridiculed him.  As a parent it’s so easy to dismiss any schoolyard taunts by telling your child, “Oh, honey, just let it roll off your back.  Don’t pay attention to them.”  Now I know that boy’s not perfect but he held his head high and that’s not easy.  He never started a fight but he never ran from one.  And after all that school ridiculing he speaks Greek and Spanish.  Jimmy teases me and says I’m James’ biggest cheerleader and guess what?  I AM.  I am so proud of him.  He gives of himself unconditionally.  He gives time to his elders.  He respects and appreciates their opinions.  He’s curious about the world and wholeheartedly receives other cultures with open arms.  We pushed him to discover other countries and off he went.  We’re just plain crazy about him.  We like him and he likes us.  So when my boy wakes up tomorrow, on his 25th birthday, he’s getting these decadent, crazy good cinnamon rolls.  Happy birthday, boysie!!!

There’s nothing like the scent of caramel and cinnamon baking to make you smile and be glad you’re alive.  These pillows of sweet delight can be almost completely assembled the night before and, while they’re chilling in the fridge and you’re asleep, they’ll also be rising, ready to be baked the following morning. 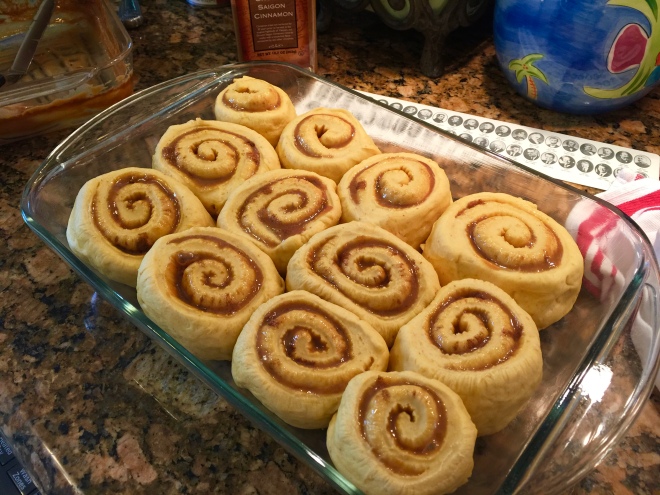 These rolls can now rise overnight covered in the refrigerator or in a warm corner of your kitchen for 20 minutes.  In one of my kitchen drawers I keep a thin, plastic ruler to measure dough, the size of pans etc.  This is my favorite ruler because it has measurements on one side and the presidents on the other.  I know… geeky.  Anyway, mark off your dough so that all the rolls are the same size thus baking evenly.  This recipe yields 12 colossal cinnamon rolls or 24 regular servings. 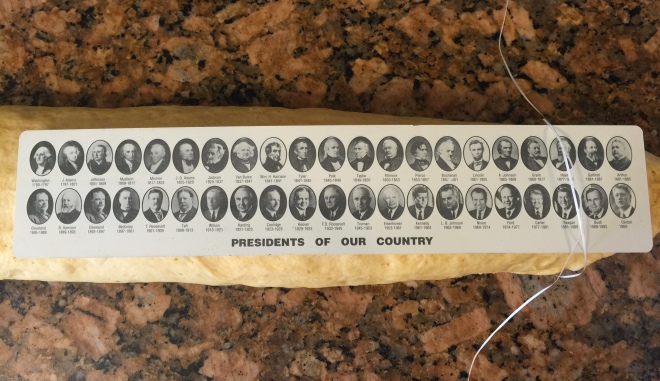 And this is the only way I cut them.  With unwaxed, unscented dental floss.  Any knife you use, I don’t care how sharp it is, will smash the soft dough and, to add to your woes, force out the dulce de leche filling.  After lightly scoring the dough to mark your 12 or 24 portions, slide the dental floss under the dough “log” and align the floss to the first marking on either end.  Cross both ends of the floss as if you were going to tie a knot but instead of looping the floss to tie it continue pulling both ends and the floss will slice the dough cleanly  and evenly.  For the dulce de leche, it may be store-bought but it’s so simple to make that I strongly suggest you try it, if you haven’t already, and then you won’t be giving your family all those chemicals we all like to avoid.  A quick recipe is in the archives.  Just put in “dulce de leche” in the search box toward the upper right of this page.  When the rolls have finished baking and have cooled just slightly, slide them whole, not pulled apart, out of the baking pan onto a large serving tray, preferably on with a lip.  Drizzle the glaze all over the hot rolls and let it ooze down the sides.  Heaven!  To re-heat after they’ve cooled completely 10-15 seconds in the microwave will have them tasting as though they just came out of the oven. 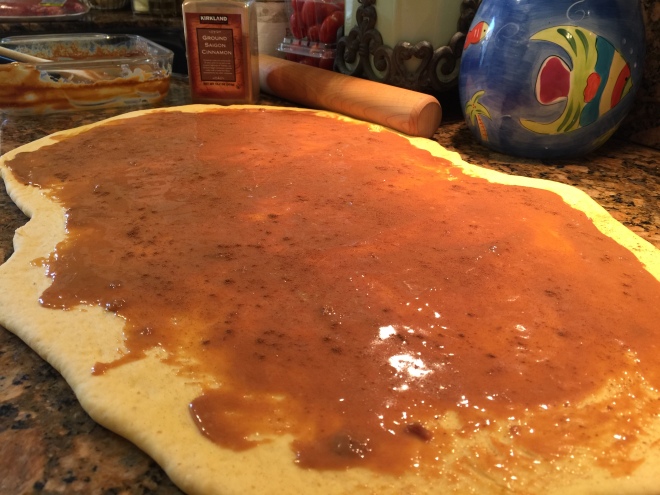