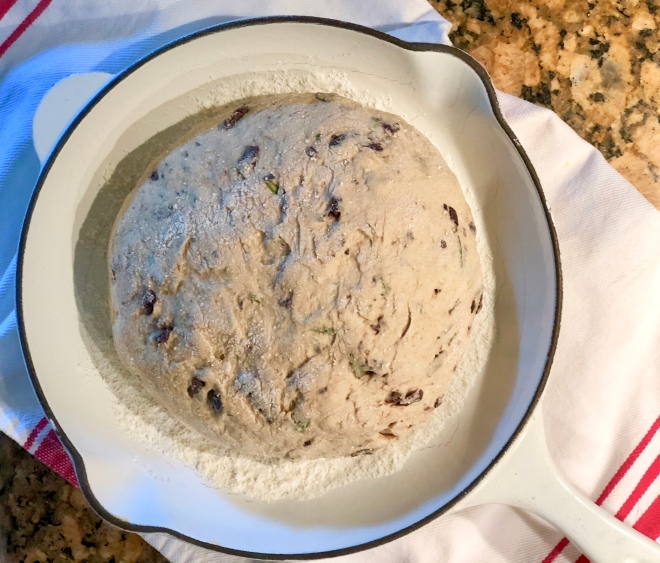 Y’all.  This bread… holy smoke!  This has got to be the easiest bread on the planet to throw together.  And it’s even vegan.  Ha!  I had a craving for the flavor combination of rosemary and Greek olives in a healthful bead but I don’t often have the best luck with breads that are good for you.  My little brother and sister used to joke if you wrapped any loaf of bread I baked in pretty fabric you’d have a most lovely door stopper.  Thanks a lot, pal.  When I gave said brother a wedge of this bread he was speechless.  He kept asking, “But what did you do?” and “It HAS to have white flour in it.  It’s so light!”  Well, I’ll tell you what I did.  I tinkered around in the kitchen.  And instead of using huge amounts of whole wheat flour I figured I’d start with a small boule so if the bread came out heavy as lead and hard as a leather brick I wouldn’t have wasted half of a bag of organic, whole wheat flour.  I’ve gotten smart like that.  Not really.  I’m consistently late for the Christmas pageant.  Sometimes I think to myself, “Dang, girl.  How do you even exist?”  I’m so pleased to be able to tell you this bread is super healthful, amazingly simple and incredibly delicious.  Y’all, there is no oil or butter involved.  Nor is it flavored up with milk, buttermilk or instant potato flakes.  No, this is one clean, satisfying bread which stands on its own.  I realize many folks say they’ve given up carbs but with 4 grams of fiber per 1/4 cup in addition to being a high source of manganese this bread is a total win.  And no need to google the benefits of manganese as I’ve already done that.  Manganese helps bone health and density, it is anti-inflammatory, aids in regulating blood sugar, it plays a large part in metabolizing nutrients, contributes to good thyroid health and is important in the healing process of wounds.  Whole wheat bread is starting to sound better and better ain’t it now?  Let’s don’t forget the role those tasty Greek olives play.  High in fiber and nutrients, Kalamata olives are high in iron and antioxidants plus are loaded with healthy fat that has been found to significantly lower cholesterol and, like whole wheat flour, is also anti-inflammatory.  I don’t know about you, but I would much rather munch on a slice of this bread rather than take a doctor prescribed statin, right?  This is the easiest bread to make and will bring you such pleasure both in making it and enjoying the fruit of your barely-any labor. 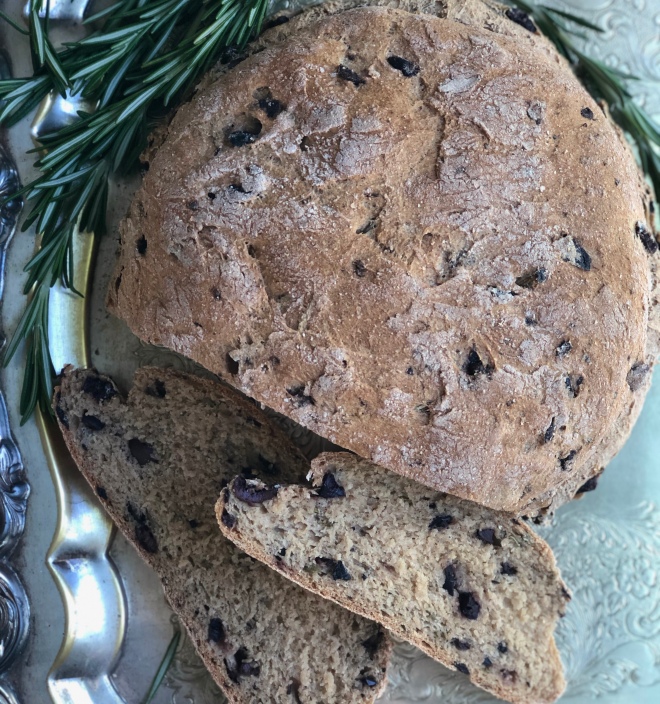 I let this bread rise for 1 1/2 hours, however, I think it could easily tolerate  a longer rising time.  It is assembled and stirred in the same bowl in which it rises.  There is no kneading needed although prior to placing in the baking dish the dough is dumped onto a heavily floured counter, folded maybe 4-5 times then pinched together to gather up into a ball.  The dough is baked “pinched” side or seam side up.  I made a bunch of different versions and in doing so decided fresh rosemary FAR outweighs dried in flavor.  Kalamata olives complement the rosemary perfectly so don’t go thinking that California olives are work out fine because they’re not.  They have no flavor and this hearty bread requires ingredients with a big and bold presence.  I bake this bread in a small 8 1/2-inch Le Creuset skillet.  Heavy bottomed is the ticket here as well as a small pan or pot.  One inch of space between the sides of the dough and pan is just enough space.  If the pan or pot is too big, the dough will spread and your bread will come out looking more like ciabatta, which is fine, but if you’d rather finish with a domed bread go for the one inch.  Last of all, the bottomed of the baking dish needs to be covered with a heavy dusting of cornmeal.  That ensures the gorgeous baked bread will slide right out after cooling and clean up will be a snap.  Oh, y’all!  I so hope you’ll try this recipe!