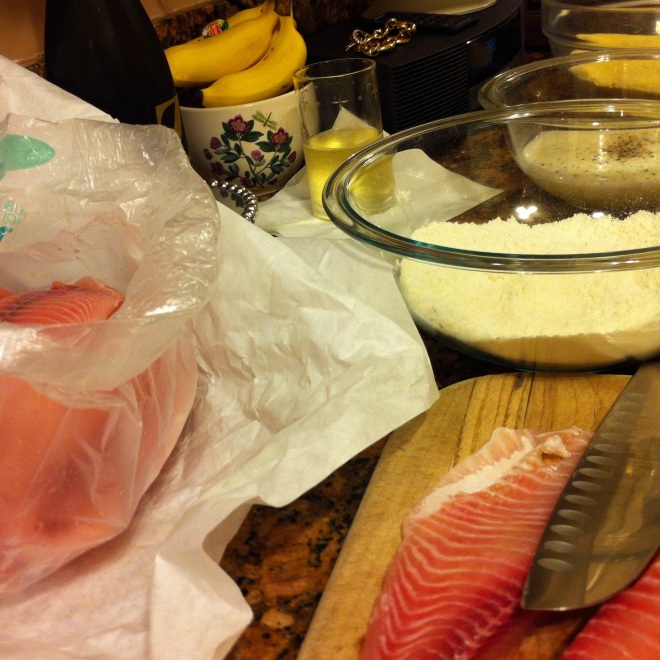 The first dish I can remember wanting to prepare came about when I was maybe 8 or 9 years old.  I don’t recall what spurred on this desire to cook, but I do remember taking some of my meager savings out of my piggy bank and asking Mama if she would please take me to the grocery store.  Mama had one cookbook, The Joy of Cooking, and, while perusing it, I had found a recipe which caught my fancy.  We went to our grocery store, Food Fair, it was called.  It sat on the property next to where Stranahan House is today, on Las Olas Boulevard.  It was bright and open and oh, so cool with conditioned air.  I went to the seafood counter, Mama just seemed to melt away, while I pondered my wisest purchase.  I didn’t know seafood was so expensive.  I didn’t even LIKE seafood!  I stood in front of that case waiting for something to jump out and say “Take ME home.  Everyone loves ME.  Cook me and you’ll be Mama and Daddy’s favorite!”.  It didn’t happen.  Plus, I barely had any money.  Why, I don’t know, but I finally decided on oysters.  OYSTERS!  I had never eaten them but they were cheap and it looked as though you got quite a bit for your money.  (Hint: they’re AAAALLL shell.)  The fish monger must have known what a novice I was because he shucked them for me without my asking, I didn’t even know the word “shuck” nor did I know of the process.  I paid, thanked the man, grabbed my bag and ran off giddy with the excitement of knowing I was going to absolutely dazzle, astonish, wow my parents.  I think I may have felt rather unremarkable at that stage of my life.  Back in our kitchen, I pulled out Mama’s electric frying pan.  The same pan she used to make spaghetti.  Here’s her recipe, boil 1 pound of spaghetti noodles and put the drained noodles into the electric skillet.  Add one small can of the leading brand canned spaghetti, mix well, cover and simmer for and hour or so.  Spaghetti.  We LOVED it because it had salt in it and salt = flavor, of which we had none.  Well, that afternoon I unknowingly retaliated on a culinary level at my poor mother.  I must have bought some kind of oil at the store because that’s just NOT the kind of thing we would have had in our house.  The recipe in the Joy of Cooking called for an oyster bath of 1 part egg, 2 parts water.  I dismissed that as unnecessary and one more step keeping me from the glories of culinary fame.  The recipe also called for fine breadcrumbs, and, again, I dismissed that, flour would be just fine.  I filled the electric skillet with oil and turned the setting to high.  Into a bowl of all-purpose flour I dumped the oysters, all together, not drained.  Then I mixed them around with, probably, dirty hands.  I was something of a tom-boy at that age, I LOVED drippy, dangley jewelry but I wouldn’t walk away from a good neighborhood fight, either.  No need to wash hands, it was just another time waster and they looked fine.  I poured the bottle of oil into the skillet, and one by one, dumped the oysters into the barely warmed oil.  The oil eventually heated up and the oysters were fried to a dark, golden color, but I remember being unsure as to how they were supposed to look and ended up cooking them for at least half an hour.  Can you imagine?  On to a plate they went and straight I flew to my mother.  Unbeknownst to me, the week or so prior my paternal grandfather had just grossed my mother totally out by inviting her to sample raw, chopped clams suspended in lemon jello, a new recipe he had made up.  And Grandpa was one strong willed man who never accepted “No” for an answer.  So she wasn’t feeling too much love for bi-valves.  I remember literally holding my breath waiting for her to swoon in ecstasy over these morsels from the sea.  I watched her with the eyes of a chicken hawk anticipating her slightest reaction.  And just like every dream mother, she passed with flying colors.  She looked at me with such love and wonderment and told me she had NEVER had ANYTHING like that before in her entire life!  She told me with such kindness that those oysters were unlike anything in her imagination.  I was thrilled.  Looking back, they HAD to have been nuggets of greasy, hard rubber.  I don’t know how she did it… but she did.  As Pamela and I were talking about the other day, there is no one, NO ONE on this planet who will ever, EVER be of the opinion that you are splendid and special, better than all the other children in the world, than your mother.  She is the one who truly believes in you.  SHE is the one who looks at you and sees only perfection.  And I say, I’m wit’ cha, Mama!! 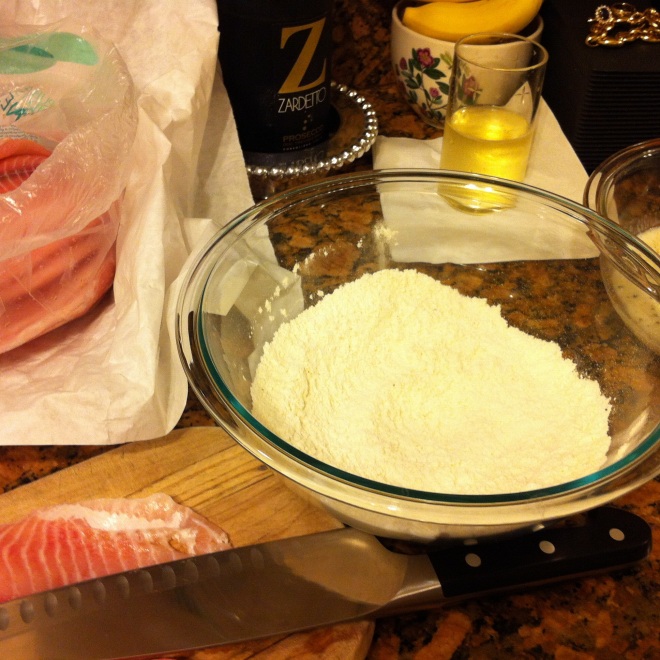 Today I have for you my recipe for fried fish, which most people really like even if they don’t particularly care for fish.  James and Jimmy love it, I always have plenty left over to take to Dad’s house and for breakfast, lunches or snacks the following day.  I absolutely adore fried fish for breakfast especially if it’s on my plate sitting next to soft, scrambled eggs. Typically I serve it with collards and biscuit or collards and cornbread and there is always, ALWAYS a big ol’ bottle of Crystal Lousiana Hot Sauce.  It is most definitely an “everybody’s home for dinner” dinner!