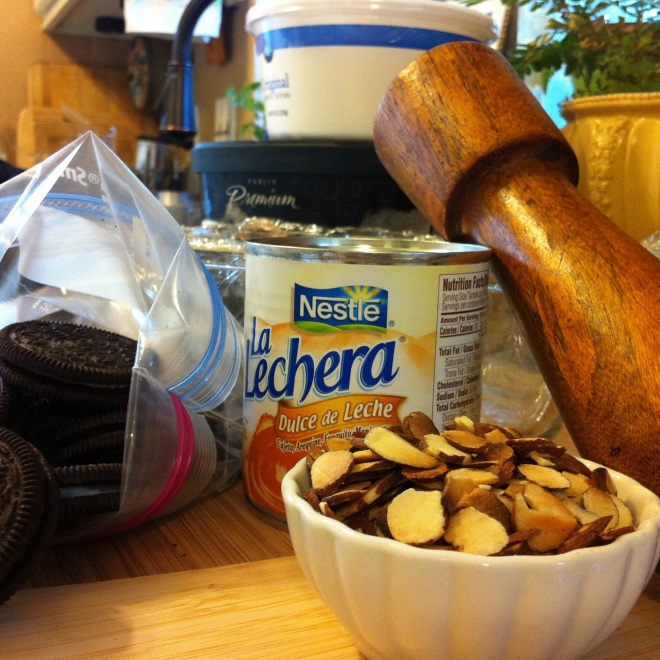 With the Fourth of July right around the corner I enjoy letting my mind wander to Fourths of the past.  Children crying because they’re scared of sparklers or the noise of fireworks.  Or the sound those same children make when they hurl themselves into the pool screaming, “canonbaaaaaal!!!”  The Fourth of July is a fabulous excuse for drinking waaay too much especially with our heat here in South Florida.  Grilled corn on the cob with butter and cayenne pepper, low and slow smoked ribs with a fiery dipping sauce, an ice-cold watermelon with the neck of a bottle of superior vodka thrust into it slowly being soaked up to make a grown up indulgence, cool but spicy Mississippi Caviar redolent with chopped pickled jalapenos and Vidalia onions, creamy, smooth baked Cheese Grits that makes the perfect bite when it runs into the Mississippi Caviar juices.  I could just go on and on. (Clearly, Alicia!)  We say to ourselves,  “It’s once a year!  A treat!  I never do this!”, and about two or three weeks later we’re all doing it again!!  Hell, it’s summertime!!  It’s what we do.  Many years ago, when Jimmy and I were dating, we had a most superb Fourth.  Jimmy had an apartment on Hendricks Isle.  99 Hendricks Isle.  Dad was thrilled when he found out. “Heeey, Jim!! Yeah!!  You know whose number’s 99, don’t you?  Yeah! Wayne Gretsky!’  From then on we referred to Jimmy’s apartment as “the Wayne Gretsky apartment”.  “Where ya goin’?”  “The Wayne Gretsky apartment.”  “Okay.  Don’t be late.”  I don’t remember the year but we were dating so it had to be at least 24 or 25 years ago.  Jimmy’s apartment was old Florida fabulous.  Just about all his friends he had met on Hendricks.  They all lived on boats, had that “devil-may-care” outlook and seemed terribly exotic to a serious Bostonian.  They didn’t wear shoes.  His neighbors were past quirky.  They were completely harmless but outlandish and unbelievably odd.  One neighbor worked as a short-order cook at a historic Las Olas greasy-spoon by day and played drag queen by night. Still wearing bits of makeup from the night before, this particular neighbor sold very small amounts of a certain “herb”, hand wrote the sale up on a receipt book and finished by ringing the sale up on an old-fashioned cash register.  While blasting “Don’t Cry For Me Argentina” on his RECORD PLAYER.  Anyway, that particular Fourth of July Jimmy had invited my family over to his apartment for a cookout and some Liquid Liberty.  We made pitchers and pitchers of Long Island Iced Tea and put them on to chill.  His apartment was on the water, a canal and his back patio was nothing less than wonderful.  The patio was terrazzo and featured a Pawley’s Island hammock hung right in the path of the salt breezes.  What made me fall in love with that man, or ONE of the reasons, was the most magnificent, sprawling mango trees you have ever laid your eyes on.  It was always heavy with fruit, giving off that sweet, decadent perfume bordering on wicked and wrong.  It was probably a mango that Eve bit into in the Garden of Eden.  Not some room temperature, mealy, Red Delicious sorry-excuse-for-an-apple.  No.  It had to be a beautiful silken, sensuous mango.  That’s not why I married him but I DID love that tree.  We made some hors d’oeuvre, I remember he flambeed some Kaseri cheese which we served with warm pita.  But, primarily, we all got tanked.  Remember, Long Island Iced Tea was flowing.  There was plenty of laughter and teasing, we had the television on with Arthur Fiedler conducting the Boston Pops.  The more Jimmy drank the more sentimental he became.  And he missed Boston.  A great deal.  Yankees have feelings, too.  So, like any homesick boy, he called home.  By then my parents had made their goodbyes, Mama probably singing “Yellowbird”, the song she always sang when she got a little tipsy.  Tommy, Pamela and I were having a grand time marching around the apartment, drinks in hand, WHISTLING to Stars and Stripes Forever.  Jimmy called his sister’s house, the nucleus of the family, and reached his mother.  Many were the stories he had told me of his mother’s sacrifices and hardships after his father had died.  A widow who spoke no English and raised four children.  All four completed their undergraduate work.  All four got their master’s.  And one his PhD.  Bravo, Yiayia!  She answered the phone, her tiny voice matching her tiny body.  With the 1812 Overture rising in the background Jimmy asked his mother of her journey to America, was it terribly hard?  How could you leave your family to go so far, far away?  How was it that you made it unscathed?  I stopped marching and whistling when I heard the emotion in his voice and saw his eyes filling with tears. With his voice cracking, I heard him ask, “Ma!  How did you feel when you finally made it in to New York Harbor and saw the Statue of Liberty?  What was it like to see that symbol, that symbol of liberty after the long, hard crossing?”  “O gios mou”, “my son”, she said, “I never saw the statue.  We were below at the Captain’s champagne reception!!”  Hahaaa!!  The whistling and marching started up again with Stars and Stripes cranked!!  I guess Yiayia had her taste of Liquid Liberty, too!!  So, as always, I’ll be thinking of all those special, courageous people who left their motherland behind to forge a new place for their soon-to-be sons and daughters.  We thank you.  And may we light you a sparkler and raise you a glass?? 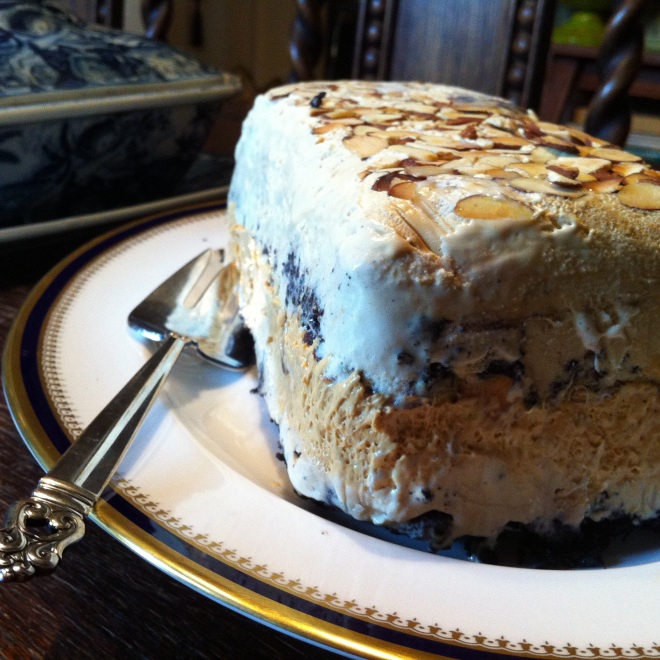 This is such a terrific summer dessert! It’s great to serve at your own house or take to a party.  It can be assembled days in advance and kept in frozen limbo until you need it.  The ice cream flavors are completely up to you as well as any cookie crumbles you wish to use.  If you like nuts, use them.  If not, lose them!  Also, the whipped topping can be left as is or the flavor of your choice may be folded in.  The only strict rule is that it does need to set up in the freezer overnight.  Four hours just doesn’t cut it, as is evidenced by the Key Lime I put together.  But that’s the only direction which should be observed.  I don’t really have a name for this.  I guess we could call it “Frozen Stuff” although Pamela would call it “Frozen S**t”.  She’s bad that way.  This dessert can be assembled in a 9X13 dish, a loaf pan, or any bowl that has a shape you like.  If you do choose a loaf pan or bowl, line it loosely with plastic wrap to make it easier to pop out.  This recipe calls for a 9X13 dish so if you’re using a smaller dish, eyeball your amounts and cut back accordingly. 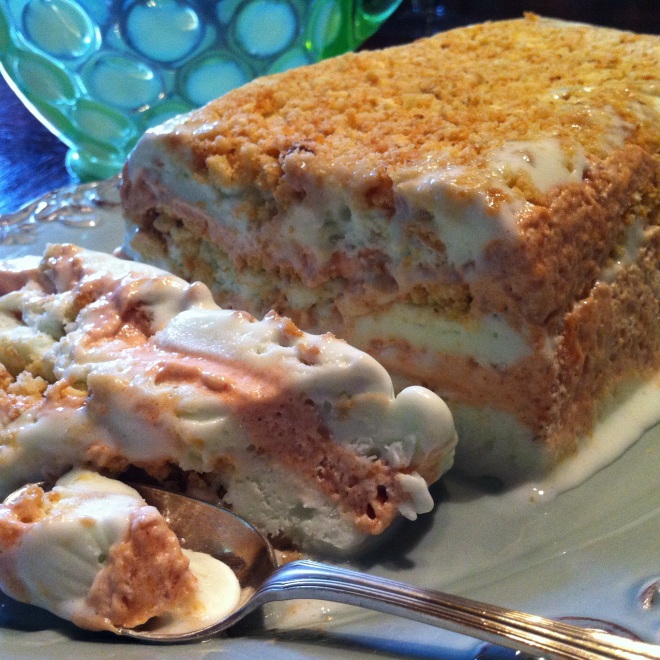 Here are two of my favorite combinations.