Country Mouse Goes to the City! 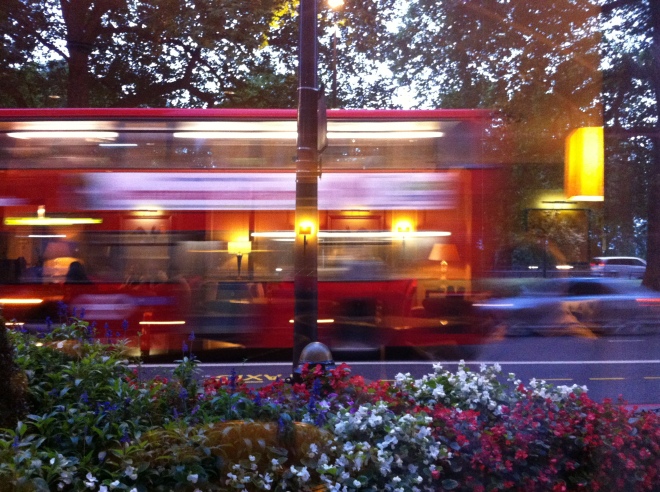 I’m back, everyone, back from a glorious and desperately needed vacation!  We had such a rough start that I was almost beginning to feel that God just wanted us to stay home!  We were to scheduled to leave on a Friday almost at the same time James’ flight was leaving to take him back to school.  The night before departure, the moment dinner had ended, Jimmy announced “There’s an issue!”  Apparently he had forgotten to renew his passport and it had expired.  What are you going to do?? I mean really.  New travel plans were made and we were then slated to leave the following Wednesday.  Was I happy?  Again.  What are you going to do?  Say “No. I’m not going.”?  Pamela said “Okay.  Just tell him you’ll go on ahead and meet him there next week.  ‘K?”  Well, that ain’t gonna happen.  Our dog had severely cut his sweet paw on a piece of glass just a few days prior so we consoled ourselves by saying at least we could keep an eye on him and not worry.  We went through rounds of bandage changes and antibiotics.  Three or four days later Jimmy’s checking his emails on his cell, it’s nonstop but that’s ALL I’m going to say, when he says “The bank says they called me.  They didn’t call me.”  He checked his voice mail and sure enough.  Message from the bank.  Apparently someone got his credit card number and was using it out in Phoenix!!!  The bank caught it but they weren’t going to be able to get the replacement card to us before our departure.   What a pain.  We thought “Okay.  We’re good.  We can roll with the best.”  Then the night before we were to leave I opened the refrigerator and noticed THAT IT WASN’T EVEN COOL!!  I opened the freezer and the ice was wet.  And dripping.  Are you kidding me??  Jimmy immediately called Sears.  The guy was coming out the following day. I was beginning to think, “This is creepy.  Is God telling us something but we’re so stressed and tired we aren’t listening?”  The following day I got up, threw my remaining necessities in my bag,  and started my travel preparations.  Hair, travel make-up, jewels etc.  I couldn’t shake that ookey feeling.  My bags were packed, I was ready to leave for the airport and the Sears man came.  What a nice man.  Took everything out of the freezer, told us what was wrong and how much the total repair would be, HAD THE PIECE IN HIS TRUCK, installed it, we paid and he was off!!!  AND SO WERE WE!!!  We arrived at the airport knowing we had lost all our first class seats but just relieved we were almost on our way!!! Short on time we ran to the gate where the gate agent happily informed us, “Just so ya know.  I was able to upgrade y’all to first.  Have a great flight!!”  BOOM!!!!  Yeah, baby!!  That’s what I’m talkin’ ’bout.  We boarded the plane, settled in and took off.  It felt good.  It felt right.  Our bags made it to Heathrow and we set off for our hotel.

I had packed a few lightweight sweaters and long pants assuming London would be cool and knowing Lesvos is cool in the late summer evenings.  What I failed to remember was Londoners don’t wear colors…at least not like in South Florida.  I had lots of red, white and hot pink. Oh!  And gold Jack Rogers.  I find the good thing about getting older is you cut through the BS really fast.  You’re in London?  Totally wrong clothing?? Get over it and get out.  There’s no right way or wrong way just YOUR way.  Now freshen up that gorgeous red lipstick and get out there!  Museums, shops, restaurants…tempest is fugiting!!! Even as we speak!  Off we went and what a blast we had.  We walked and walked through museums each more enchanting and fascinating than the previous, through countless neighborhoods, ducking into bookstores and pubs.

We even stumbled upon a shop which carried needlepoint canvases and pillows exquisitely stitched by prisoners in the British penal system.  Jimmy most generously sprang for a magnificent canvas of a beetroot, rich in purples and greens.  “Thankyousweetheart,you’rethebest!!!!!”  It’s what I always say but it’s true. 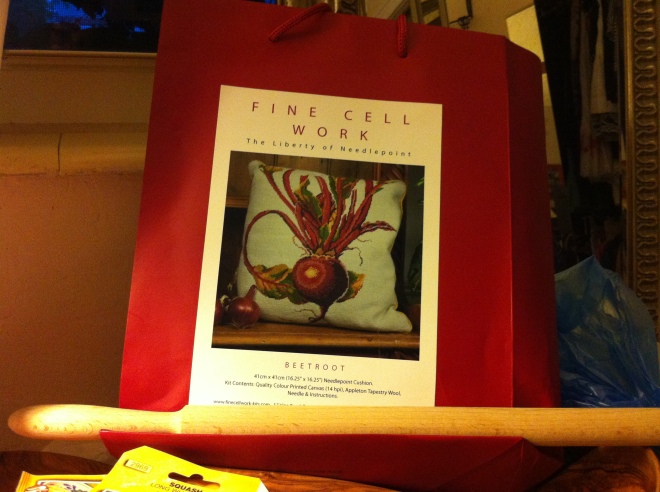 Such loot. And we had a magnificent time.  By late afternoon on our second day the skies opened and the rains started.  We happen to be by a rather good-looking wine bar and restaurant.  I said to Jimmy, “It looks good!  C’mon!!”  So in we went and was it just a little slice of perfection!

We settled in, ordered a bottle of water and began perusing the menu.  Oh, glory be!  It was beautiful.  And to truly show that the god’s were smiling upon us the daily wine flight was completely Greek.  While waiting for our wines to be surrendered to us we decided upon two small plates to be split.  Roasted sweet potatoes, sauteed spinach, girolle, (a pale yellow or orange wild mushroom ours being from Scotland),  sandwiched between more roasted sweet potatoes and topped with a gorgeous slab of saganaki cheese broiled to a golden perfection.   Oh, wait!   And finished with a generous drizzle of small-batch Greek olive oil.  The second plate to be shared was a stacked dish of tomatoes roasted with fines herbes, guacamole, cold medallions of wild caught local lobster, another dollop of guac topped with a crisp round of local country bacon.  CAN I GET A WITNESS???  By the time the wine flight came out and I could barely contain myself.  It was exceptional.  Unfortunately, it was a bit of a tease and I wanted more…lots more!!

Then out came our plates.  What joy!  What bliss!  Both were just brilliant.  The Hadzidakis white was perfect with the silken avocado and buttery lobster.  And the Naoussa, you ask?  Mercy.  Like a Pinot Noir it cut through the richness of the sweet potato and the golden slab of saganaki cheese. 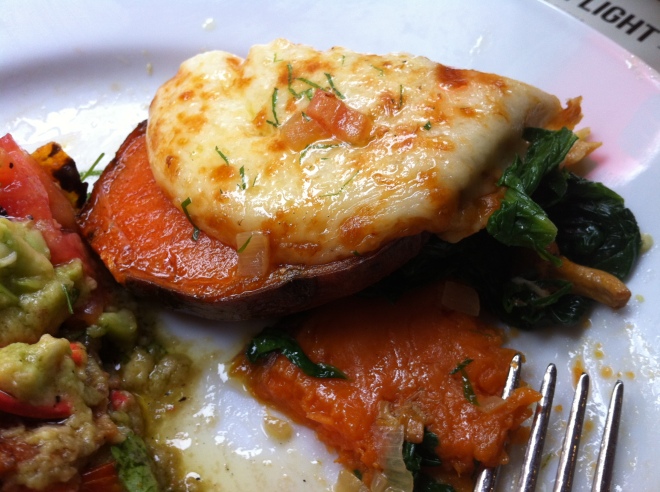 We kept marveling at the knockout meal we were so thorougly enjoying all the while questioning why we don’t have something like this at home?  Local is so exciting and gratifying but nooooooo.  We have places like the Cheesecake Factory, (can you say morbidly obese to me??), or even worse Appleby’s.  Although I’vd been told that Appleby’s serves likker sooooo… I might have to take that observation back!!  But my point is that even if food is rich if it’s clean and eaten in small amounts it can only enhance the quality of life.  All you can eat is NOT the way to go.  Anyway, enough of my preaching.   I ate ALL of my lobster dish before I could photograph it so last night I made my version of it.  I added spinach sauteed with a little shallot to add another layer of flavor as I really wanted another green vegetable.  People, it was so good!  Granted the bacon wasn’t local but I bought the best I could find.  Well worth the effort.

We decided against having dessert and had the last glass of wine in the flight as our after lunch treat.  YES!!!  A Muscat Petit Grain from Samos and our eyes were rolling back in our heads.  Again.  Cold, sweet and crisp I could easily see this not only with dessert but with foie gras or a pate.  Happy and sated we bid our adieux and stumbled back out into the rain.  We walked miles in the rain.  I’m not exaggerating.  And ALL I could think of was how my brand new gold Jack Rogers sandals were going to be ruined.  Ruined!  Slogging through the streets of London town I finally told Jimmy I have GOT to find some shoes.  Really.  I mean it.  My Jacks are going to be rurnt.  RURNT!!  We found a mini-mall and in the middle of six or seven Arab men haggling over the prices of suitcases I found the most darling hot pink, butter suede, closed toe loafer with a platinum link across the top.  And it was on sale!  Happy again we walked the 7 miles back to the hotel.  It was a good, good day!!