It was so hard to leave the island of Lesvos. This is the first and last view of the town of Molyvos, the castle sitting majestically over the city. We were on our way to the airport and I asked Jimmy as quietly as possible, so he wouldn’t get mad, if we could pull over so I could take a few last photos. He was fine with it, “Just make it quick. It’s going to be tight.” I ripped off my seat belt as he pulled over to the side of the road. It was barely 8:00 in the morning so the air was still cool and the sun was still coming over the hills and mountains. I took my pictures, still marveling over the incredible surrounding landscape, and smiled as I realized the island was giving me a going away gift. Just me…and no one else.  I heard the muffled clang of bells…and then the sweet, soft bleating of goats. I looked over to my left and there they were. Chewing on grass, their little velvet ears flopping over the sides of their long faces; some bleating as if to call to their master, “Come milk me! Relieve me, please!” What a gift.  It’s a wonderful memory and somehow made it easier to hop back into the car and drive away. Our flight from Lesvos to Athens was a pleasure. Uneventful, smooth and 45 minutes later we taxied down the runway on the mainland. We loaded our luggage into our upgraded Audi, thank you so much Avis, and got onto the highway towards the Peloponnese, the peninsula forming the S part of Greece, about an hour and a half from Athens airport. I didn’t say anything but I couldn’t imagine liking a place as much as what I had just left. I have a tendency sometimes to lean towards the predictable or the easy and it’s just not a good thing to do as one gets older. Jimmy’s good when it comes to “keeping it fresh” as we like to put it, and it would have been easier just to stay on Lesvos and poke around. There are so many beaches and towns and tavernas yet to be discovered.  But we moved on to a new adventure and that was the way the end of our vacation was going to be. The drive was a pleasure as the highway we took was a smooth drive so we got to the city of Nafplio in record time.

We laughed on the road towards our hotel.  It seems the hotel is surrounded by orange groves and some abandoned old houses.  We also encountered a small set of railroad tracks overgrown with weeds and complete with stop signs.  We never saw the tracks being used but decided they were for hauling oranges in one of those little box things that has see-saw like handles.  You know what I mean.  There’s a person at each end..one pushing down the other pulling up…like on “Petticoat Junction”!  Remember?  But anyway, the hotel.  What a treasure! Beautiful antique prints, edgy oils and lush gardens. There are numerous sitting rooms with fireplaces and the well-appointed bar also has a massive marble fireplace just perfect for a cold, damp winter’s day. The pool was sparkling blue encircled by canvas-covered chaises longues and shaded from the searing sun by well-placed canvas umbrellas. Being the height of Greek vacation there was the ideal number of couples, children with arms looking like little Popeyes from over-inflated water wings, families, tweens learning the art of flirtation and one Greek movie starlet wanna-be who hadn’t quite mastered the art of walking on 7″ heels.  A great and most entertaining combination! Our room was lovely with a blue shuttered window overlooking a charming garden, shadowed by the balconies of the adjacent rooms. This’ll work! I was starting to look forward to going into town. 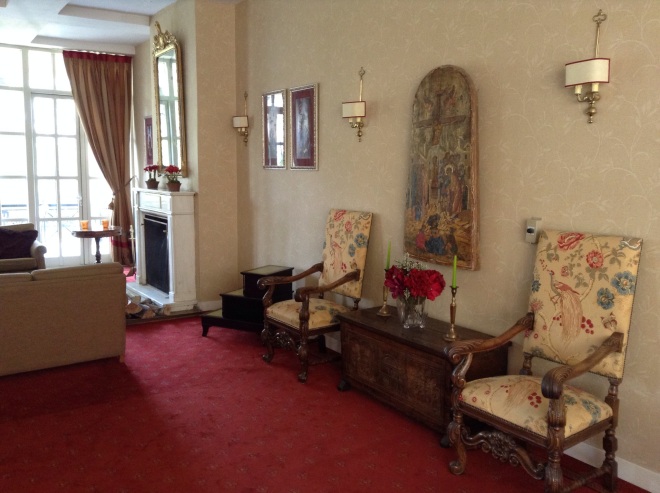 I do love me a good, traditional bar. The drive from the hotel into town is mediocre at best but then drops you down in the waterfront and is it glorious! The center of town is charming, very European and sophisticated. Old but clean and geared toward the pilgrim on foot.  Nafplio’s waterfront boasted a month-long open air book fair.  It was fabulous!  Just to poke around, take in all the cute Greek pups on leashes and people watch.  Every night we chose to stroll through it. 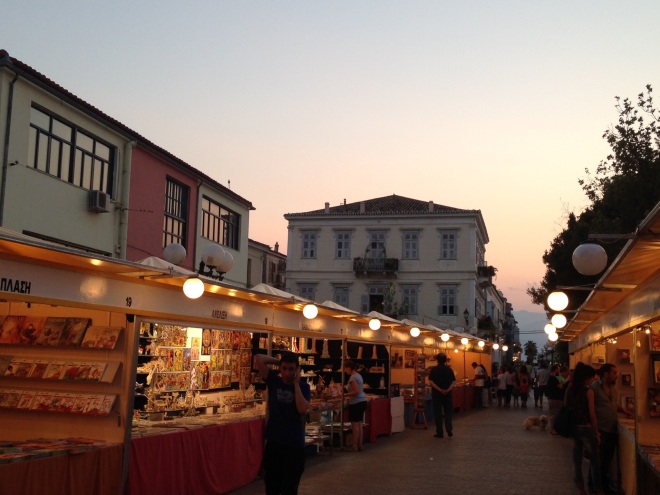 On the other side of the book fair we were greeted by a gorgeous pedestrian center replete with traditional neoclassical architecture, balconies entwined with bougainvillea and narrow streets paved with what looked like scored marble.  High fashion boutiques, restaurants, jewelry stores, gelato shops, cafes…they just went on and on.  This town is lovely!  Every night we had local fish and vegetables washed down with cold, crisp, Greek white wine.  And, yes, the ubiquitous deep, red watermelon brought to each table as lagniappe from the proprietors. Oh sweet Jesus, it was so good!  We found a pipe shop and Jimmy treated himself to a new pipe for his upcoming time in Boston.

We found an exquisite museum, actually Jimmy found it…he always does, and as it was right before closing time we had the entire museum to ourselves.  Both the ongoing exhibit and the permanent exhibit were vibrant and relevant.  On the first floor were Greek oils from the pre- and post-Turk Ottoman war and occupation.  The second and third floor held vignettes of greek life and culture primarily from the 19th century.  Clothing, jewelry, furniture…entire rooms appointed in the style of the times.  Whole tables set with antique Greek linens, china, crystal and silver.  It was fascinating.  And we didn’t have to share the museum with anyone. 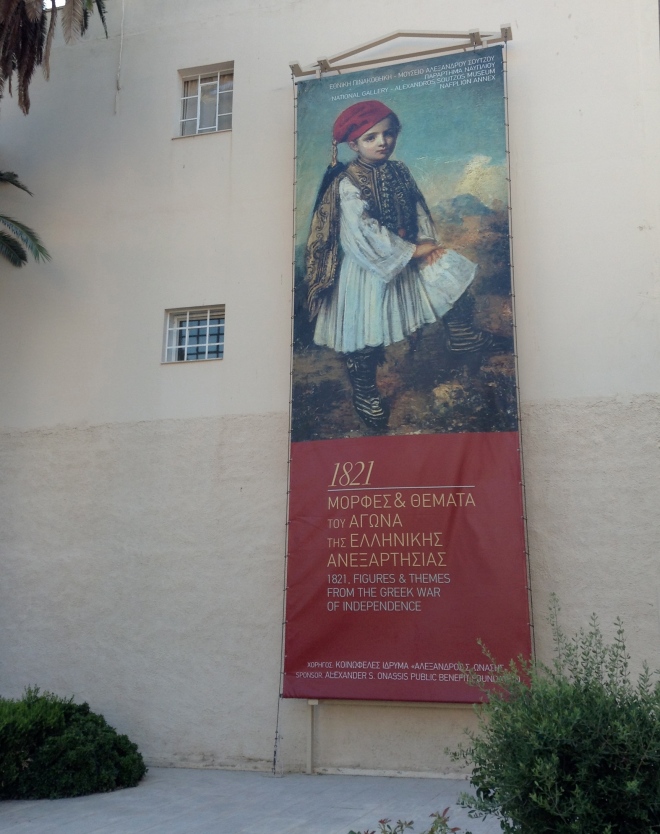 The following day we went on a road trip to the nearby ruins of the amphitheater in Epidavros.  I was a wonderful drive, tranquil and easy.  The sun was full-out and above us when we arrived which made for a spectacular sight but it was hotter than blue blazes!  As we made our way to the top we marveled at the Greek ingenuity at building such an enormous structure and with such precision…boulder on top of boulder. 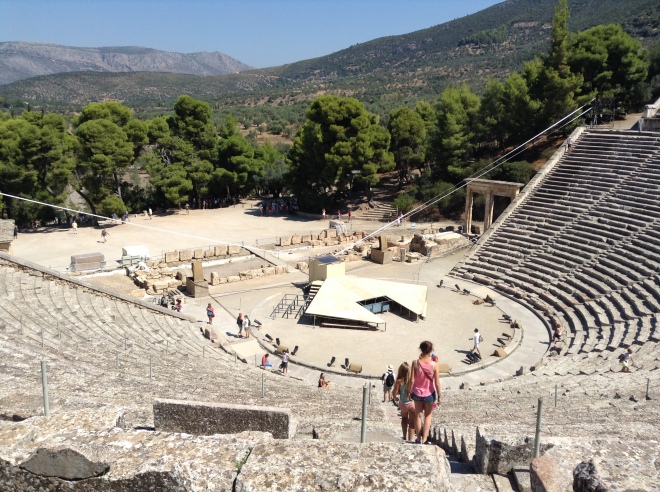 We spent the morning there and then drove to the beach for more seafood.  We cut through more groves and found ourselves a lovely seaside spot.  Tables and chairs were set up outside under the protection of a long thatched roof and into a patio and spilling down to the beach.  Think “Shirley Valentine”.  Honestly.  I went to the ladies room to freshen up and ALMOST found myself walking into someone’s HOUSE.  The lady of the house gently and graciously directed me in the right direction as I was about to cross her threshold.  When I got back to the table this is what I found.

Calamari fried with the lightest, crispiest of batters quickly cooked to a golden perfection.  Most welcome was the cold, crisp Greek salad sitting next to it as the day was a real scorcher.  And to push the last few bits across my plate was a basket of crunchy, yellow Greek bread…covered with toasted sesame seeds.  Soft breezes and the sound of the waves made the meal perfect.  I’m serious.  Think “Shirley Valentine”.   We then made our way back to the hotel for naps and an early evening of a fine walk through town followed by dinner.  Naps, showers and outfit changes later we pulled into our new favorite parking lot on the water and set out to the main plaza of the town dodging cars and the searing rays of the setting sun.  I take great comfort in finding almost a rhythm, choosing most-liked places, knowing the schedules and business of friendly merchants and people when I travel.  We cut through the same gelato stores and restaurants, crossed the street with the “Little Mermaid” movie poster in Greek advertised on the dark, green lamp-post and that’s when I realized I didn’t feel very well.  You know…that little queasy, kind of tired feeling you get WHEN YOU DON’T DRINK ENOUGH WATER.  Ugh.  And as a Florida girl I know better.  But that’s when I say to myself, “You’re in _____.  Suck it up and shut up.  In 15 minutes you’ll be back home and you’ll have plenty of time to feel ooky.  Figure it out.  N.O.W.”  And so I did.  Right about the time we passed the custom-made sandal shop. 🙂  Jimmy said, “Why don’t you go in?”  “Okay!”

Yeah!  Feeling a lil better nah, aren’t cha?  And I DID feel better, my new sandals safely tucked away in my bag.  We continued strolling down the narrow streets and heard the soft, deep Byzantine chants coming from one of the churches.  We always stop, light candles, pray and present our private petitions.  The church was small but intimate and oh, so exquisite.  I found us seats in front of a fan and could have sat there all night.

But time was marching on and it was time to get dinner.  We had been walking and then all of a sudden just stopped.  Jimmy said, ‘This look good?”  “Sure does.”  And we were seated.  I looked at the other tables to see what they were eating.  I still didn’t feel too sharp.  And then I saw it on the table behind me.   Wet, cool and sweet were wedges of melon on a plate surrounding a small mound of prosciutto dressed with a sheer scattering of fresh pomegranate seeds and roughly chopped walnuts.  Come to Momma.  I left most of the prosciutto, it was the melon I was after.  It was cold and sweet and just about melted on my tongue.  Perfection.  I ordered a little Greek fava, a thick puree of yellow, split peas served with a drizzle of good Greek olive oil and a tiny bowl of minced, red onion. It was just what the doctor ordered.  A glass of cold, white wine and I was a new person. 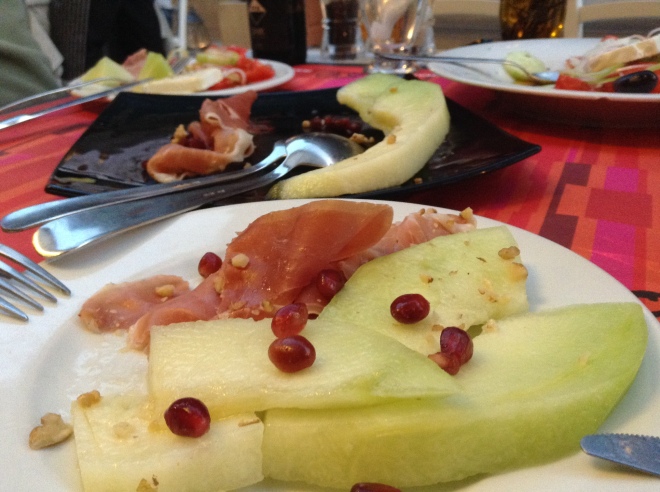 And let’s don’t forget the fava. 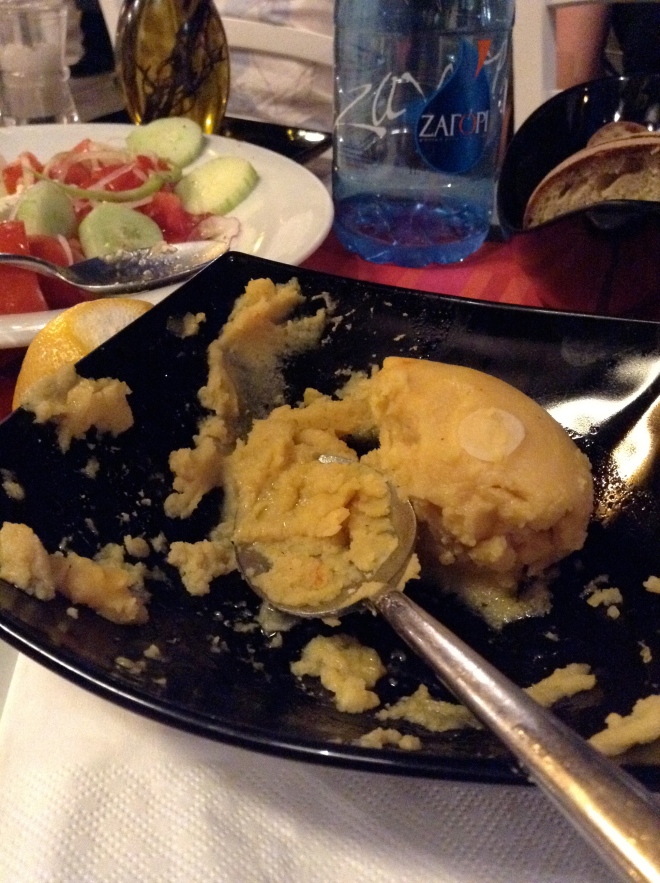 Nightfall set in, dinner was over and it was time to go home.  Under the big, fat pearl of a moon, through the town plaza, passing the big and small boats, the Sweet Cookie store and the architectural dig and through the orange groves we were back at our home away from home gearing up for the following day’s adventure.  It was a full and rich day!