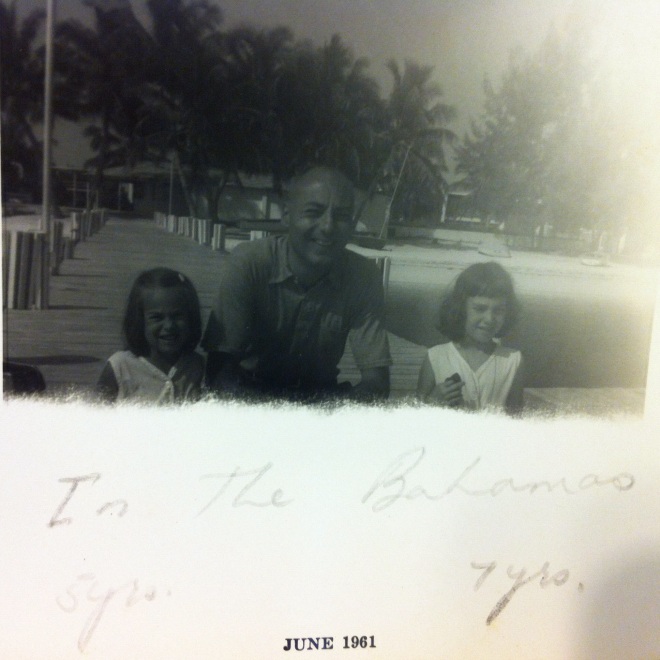 Remember that delicious feeling of wonderment when you went waaaay under water in a swimming pool as a child?  I think it starts at 4 or 5 years old and it’s pure magic.  The water would always be crystal clear, reflecting the sunlight on the sides and bottom of the pool in dancing, shimmering fragments.  It was the color of a perfect aquamarine, almost completely silent, all sounds muted and softened by the silky mantle of water.  And it was so pretty, all blue and white.  I believe I was five and Cynthia seven the first time our parents took us to the Bahamas.  I don’t recall anything about the flight but I remember that hotel as if it was yesterday.  It was the height of beauty and elegance.  The epitome of luxury for the two little girls!  There was an exhibit all through the hotel of the crown jewels, Grand Bahama and the rest of the islands in the Bahamian chain being part of Great Britain’s territories.   I remember standing in front of case after case thinking, “I want that.”  And, “I want THAT.”  5-year-old girls will kill for large jewels, or at least that one would.  Upon our arrival, I had found while exploring the vast domain of our room, a white, plastic pen with a wide gold band around the middle and a huge, white feather on the end that would sway back and forth when you wrote.  I immediately claimed it for my own.  I don’t know what Cynthia got, maybe stationary, but that pen was MINE.   And I carried it everywhere, knowing that everyone who saw me with it was able to discern, “Why, she’s not a mere 5-year-old.  She’s a glamorous, mysterious woman.”  The hotel had open, breezy walkways with huge potted palms and exotic flower arrangements everywhere.  And the pool.  Oh, my goodness!  It was one of those free-form configurations that curved and meandered around palms, hibiscus and alamandas.  Every corner of the property had immense bursts of hot pink, fire-engine red and sunset purple Bougainvillea.  The pool was something from a tropical fairytale for us.  And right smack dab in the middle of that pool was a bar.  A BAR.  For 1960 that was pretty crazy stuff.  You could swim right up to it and get a drink.  Grownups would get their cocktails and lucky children would get Coca-Cola.  The two little girls didn’t get anything because we were allowed nothing other than water or milk.  I spent all my days there in that pool, swimming around the bar like a bee over honey.  Early on, I had spied that section of the bar that housed the olives, lemon, lime and orange sections, cocktail onions, and nirvana…maraschino cherries.  My grandmother in Puerto Rico would, every blue moon, make us cherry milkshakes with vanilla ice cream and syrup from the maraschino cherries.   With a real milkshake machine.  Anyway, round and round that bar I swam until finally the bartender asked, “Hi!  Would you like a cherry?”  Would I? Yes, please!  Shyness cast aside, I asked for more until the bartender said, “Listen, just take what you want.  Help yourself.”  Clearly, he had no children.  Well, I helped myself.  And when the garnish container was empty, he’d just fill it right back up with the gallon jug of cherries stashed under the bar.   I ate those cherries until I got that ookie feeling, you know what I’m talking about.  Like there’s a red-hot runaway freight train about to fly out of your bottom.  There were lots of frantic calls to Mama, so incredibly gorgeous in her black maillot.  Of course, she took care of everything, in her loving, graceful way and never made mention of it again.  Dinners were in the formal dining room and Cynthia and I were served macaroni and cheese, or macaroni pie as it was called in the islands, a new treat never before tasted by us.  I don’t remember anything else of that vacation except the flight back to Fort Lauderdale.   For all my parents eccentricities and unconventionality, they were rather formal.  When Cynthia and I were in public we were seen and not heard, we were not the center of attention.  We had flown often to Puerto Rico so were accustomed to flying.  The two little girls sat side by side on the flight, nicely dressed and quiet.  Until the older one started messing with the younger one.  She just wouldn’t leave me alone.  I recall hissing as quietly as possible, “Stop it.  Stop it.  Leave me alone.”  But nooooo.  I remember, in slow motion and with narrowed eyes, holding up my  plumed pen, and with clenched teeth, striking Cynthia in the upper, fleshy part of her arm.  I can still hear that faint “pop!” when the ball point punctured her flesh and the indentation the pen made before it entered.  Yes.  I had stabbed my sister.  Well.  You have never seen such drama, from both of us, as the realization sank in for her, that she could get me in major trouble and score big points with Mama and Daddy.  I understood I had broken the rules of public behavior and chances were… well,  things didn’t look too good for me.  Mama and Daddy were shocked by the scandal we had caused and were none too happy.   But they knew how to punish me.  Oh, yes, they knew the way of correction and discipline all too well.  They broke my heart, that’s what they did.  I remember sobbing uncontrollably, I was heartbroken.  Heartbroken.  Daddy, gently but firmly, asked, “Where’s the pen?  Give it to me, please.”  And I never saw that exquisite pen again.  NEVER.  So, I guess the moral of the story is, if you need to stab your sister then use a pointy stick, a Bic pen, scissors, garden shears, anything but your newly found precious treasure! 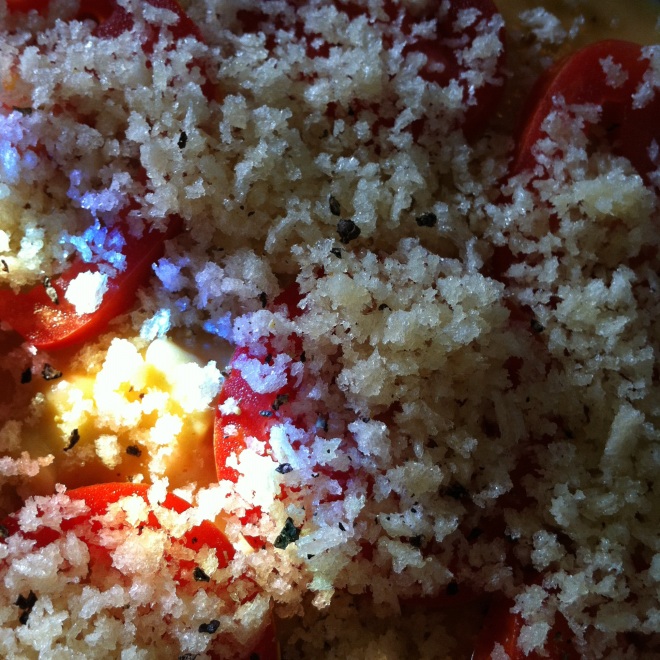 This is an updated version of what Cynthia and I dined on for dinner during our vacation.  I scattered Panko on top, unheard of, and used whole grain pasta, also inconceivable for those times.  I like a deep, rich mac and cheese, strong with flavor and character.  If there are no children involved I’m quite liberal with the cayenne.  If you’re not a lover of heat, add the pepper slowly, tasting the sauce as you add and stir.  You can always add more if you like but if you add too much your dish may be compromised.  Thankfully, if it’s James or my nieces, I need not worry.  They love it anyway I prepare it.  I know some people are turned off by the addition of the tomatoes baked on top, but I say they add color, obviously flavor, and most importantly, the acid they bring cuts the richness of the cheese and bechamel ever so nicely.  With or without, it’s a great dish!