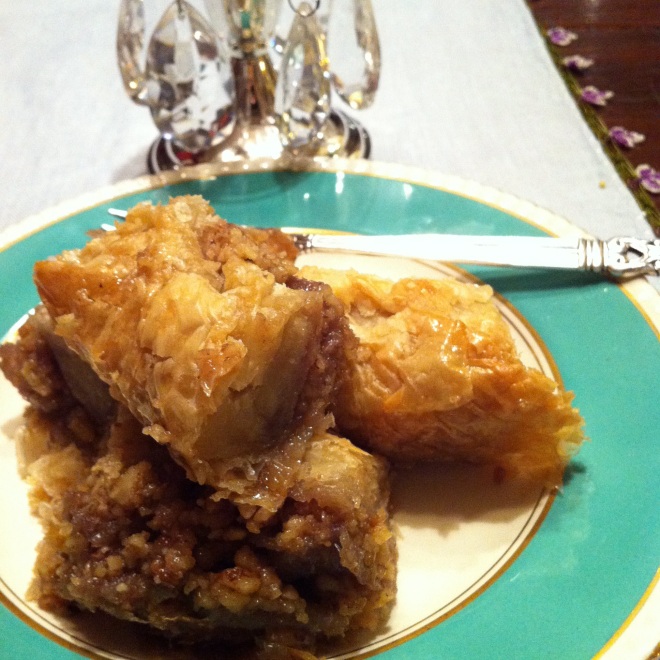 Banging around the kitchen this evening, I heard an interview on NPR of Greece’s ex-PM, George Papandreou.  I had just gotten home, still had to change out of my work clothes but first let me just straighten this, wait, let me put that away… Y’all know what I mean.  As I wiped down the counters, or did something equally significant, I stopped to listen to what Mr. Papandreou had to say.  There were no surprises in his comments but they did turn my cerebral energies towards my island, my heaven, one of the most beautiful places on this planet.  Lesvos, Greece.  I thought of our daily activities and all the people we’ve gotten to know…and really like.  Not just family, but shop owners, hotel staff, restaurant owners, waiters, locals, dogs, donkeys, horses, farmers, our tastes run the gamut. 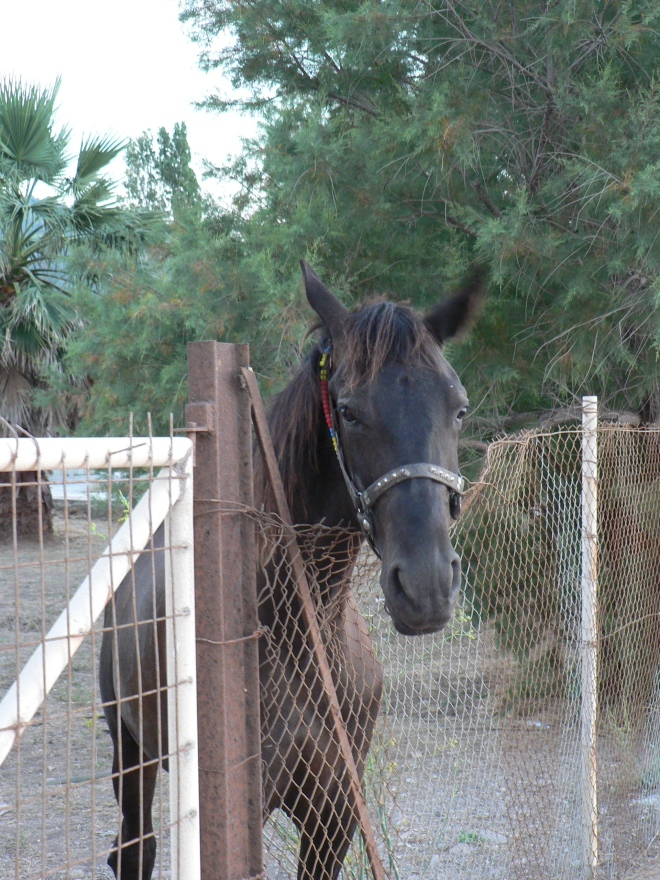 We try to go for at least two or three weeks every summer but last year, when the temperature in the house soared to the high eighty-somethings, we took the envelope marked VACATION 2011 and handed it to the AC man.  Yes, we needed an entire new central air system.  So it’s been two years this summer since we’ve been to Greece.  I miss it.  And I worry about it.  We’re going this August.  What will we find? Thankfully, the island of Lesvos is not dependant on tourism.  We’re usually about the only Americans there!  None the less, I’m sure the island, like the entire country, is reeling from this hideous financial quagmire.  I thought of my early morning runs, 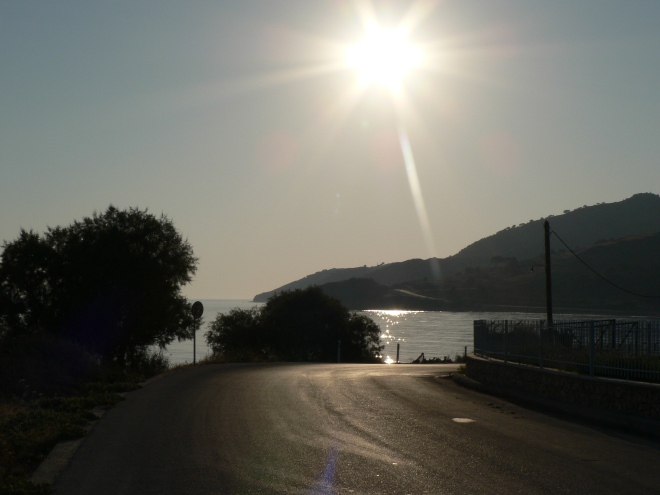 never starting later than 6:30  in the morning because of the crushing heat.  The sun would start coming up at 5:30, I’d see it peeking through the hotel curtains.  It felt soooo good in that bed, especially since we had usually had a drink or two the night before.  Sunscreen on, contacts in, hair back, shades, cap, music and I was off.  The resort where we stay is terraced and there must be 7 gazillion steps from top to bottom.  Each terrace has vines with velvety, deep orange flowers growing and I would always stop and just look and take it all in.  It’s unbelievably magnificent.  The swath of brilliant orange, the ancient, gnarled olive trees and then… the Aegean. 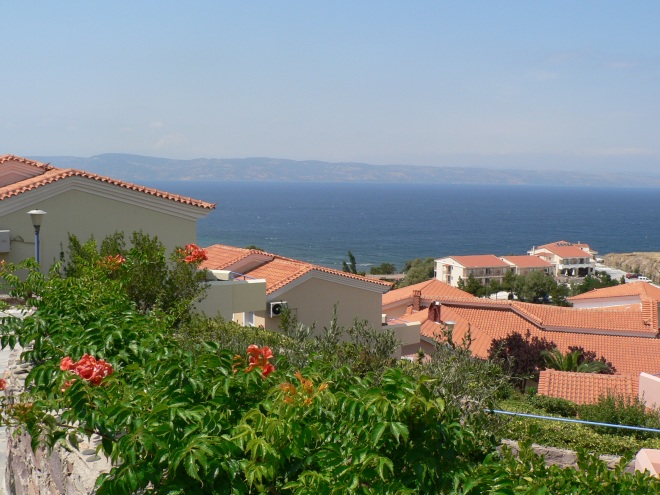 I’d trot down the steps figuring that would be a sufficient warm up, there really isn’t any place to sit and stretch, and then, on my way down, decide which direction I would go.  Funny, but each morning I would inevitably start off in the same direction.  Away I’d go with my walk-man, then in later years, an iPod, music blaring just way too loud for my poor eardrums but I felt incredibly happy and free.  Leaving the Sunrise, that’s the name of the hotel where we stay, I ALWAYS turned left and headed towards the hot springs.  I would race-walk on the winding road and my unbreakable rule was any hill, you absolutely must run.  Up AND down.  Those are the rules.  And you can’t stop unless you come across something really cool or pretty or dead.  My favorites tunes would come on, helping me make up the steep hills.  I met the most darling little dogs sitting at the end of the driveway of their hotels or family’s summer home every morning. They’d watch, loyally guarding their homestead, and at attention, too.  It took a few years for us to become friends, but we did.  There was a pack of wild dogs that lived on the beach but they didn’t look feral.  They were small and cute, however, as I’m not one to temp the fates, mutual respect was observed by all.  They lived close to a guy who would be homeless except HE INHERITED A SHACK ON THE BEACH AND THE SAND IT SITS ON.  Can you imagine being left beach property? Below is a photo of his “shack”, I snuck up on it and took the picture as fast as I could before the dogs alerted the man of my presence.  He’s mad as a hatter and I wasn’t about to upset his applecart.  Things like that just scare me to death! 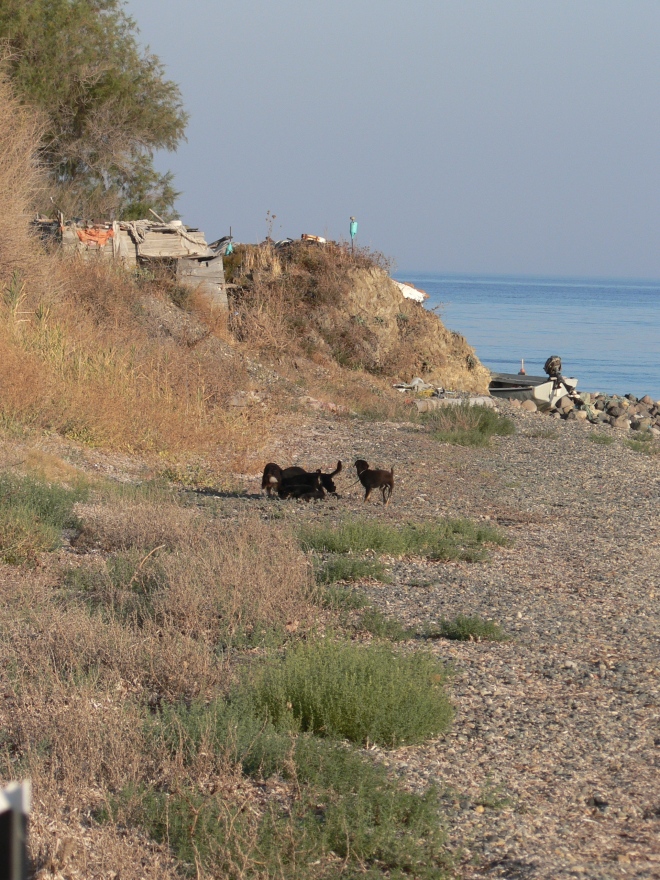 Continuing on, I passed older, sprawling hotels, newly renovated with flowers everywhere, lemon and orange trees jumping out from around every corner and majestic swimming pools all lined with local marble.  Old school meets new school.  Up and down the hills I welcomed the gusty winds as I began to feel the morning heat.  I’d still be riding on happy, it’s just so incredibly gorgeous.  The Aegean was right next to me, waves gently lapping at the stone beach.  Can you stand it?  When I heard fast, hard music, I’d look around, not that there would ever be anybody out, and play my version of air guitar.  I love classic rock and, in years past, would carefully pack my fave CD’s,  I ran in some kind of reverie and, when my most loved chorus would come on, I’d burst into a blistering air guitar riff.  And that’s when the sound of a deafening horn BLEW me off the road.  Scared the life out of me!  A chain of foul and ugly words spewed forth from my mouth as I was harshly jolted out of La-La land.  Almost falling, I spun around to see who was the dolt, the dunderhead, the ASS who was fixin’ to feel my wrath TAKE.HIM.DOWN.  I turned and saw the most mammoth tractor, dressed with a flowered wreath and finished with a smokestack train whistle. Seated on the very top was a man with the biggest handlebar mustache I had ever, EVER seen.  And he was laughing at me.  Yes, laughing.  Hard.  He had on one of those black and white checked headscarves like Yasser Arafat used to wear to block out the sun.  I spoke no Greek, none, except for my food vocabulary and what was I going to call him?  You freakin’ loser stuffed grape leaf?  You cold glass of white wine?  Well, I showed him.  I gave him my haughtiest, scathing look and off he chugged, laughing all the way down the road.  In the following days I’d hear him coming and, you bet I made it a point, I would just stand out of the way until he passed.  A full year passed, we’re on vacation, YAY!, and I’m back to working out.  I heard the familiar chug-chug-chug.  As he passed I didn’t reward him with a smile but I did, ever so imperceptibly, give him a polite nod.  That’s it… that’s all he got that year.  Now we’re into the following summer.  Two years later I’m back and running on the same road, hot, sweaty, winding down with Freebird, and I hear it.  Chug-chug-chug.  I was elated!  By then I had been taking Greek for a few years.  Every so often I would think of this man, almost fondly, during the year especially during winter when the days would get dark early and I longed for a 9:00 p.m. sunset.  By that time my husband, Jimmy, and I gave him a name, “My/Your Friend”.  He tooted his horn, still laughing at me, but this time I managed to sputter my name and my nationality as my face lit up with a smile to match his.  I saw him at least every other morning and we greeted each other with big smiles. laughter and waves. I have no idea where he was going or where he’d been.  On my last day I took my camera.  This is before cell phones with cameras.  I’d run, take a few photos, run, take a few photos and then I heard that familiar engine cough.  I turned, smiled and waved.  I gestured with my camera, questioning was it okay to take his photo?  He just laughed and kept smiling but brought the tractor to a halt giving me enough time to snap a few shots. The sun had just come up and was just blazing away behind him.  It was too, too bright, the photos would never come out.  And I knew he wouldn’t turn the tractor around just so I could take his picture, he seemed to be a real man’s man.  What I had would just have to do.  The following year I never saw him on the road but, one day, driving through some village, in the corner of my eye, I saw him, headdress on, sitting outside a taverna with his cronies flipping his worry beads.  I felt so much better that I knew my friend was all right.  I hope he’s well.  I hope I see my friend.  And I hope he’s on his tractor.  I’ll keep you posted! 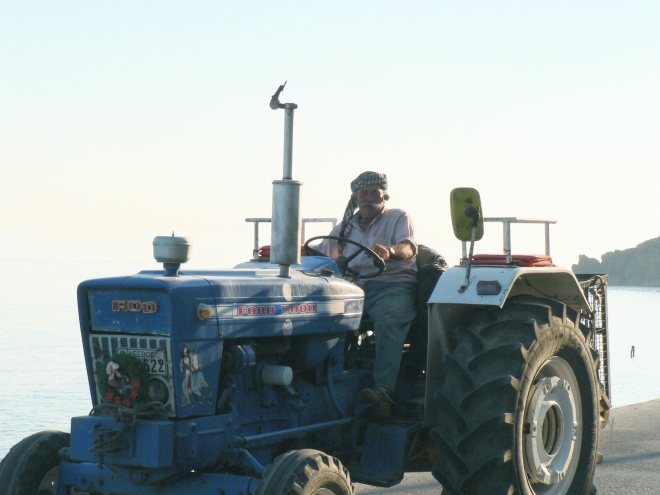 I want to give you a quintessential Greek dish, Baklava.  It’s easy.  You just need a little time.  The nuts are interchangeable so you can combine them any way you’d like, walnuts, pistachios, they all work.  A syrup is made to pour over the Baklava in the final stages of preparation and either fresh orange or lemon juice and peel can be used.  The spices in the syrup call for cinnamon, but as of late, I’ve also been adding a spice called Mahlep.  Mahlep is the kernel of a certain kind of wild cherry.  Its flavor is extremely subtle, its addition adds another layer of flavor.  If you don’t have an international market close to you, don’t fret.  It will be still be fabulous!  But if you do, grab some.  It’s not expensive at all.  The kernels look like enormous sesame seeds.  When I make the syrup, I toss a tablespoon of the mahlep into a ziplock bag and pound it with a pestle on the counter.  Enough to break it up. 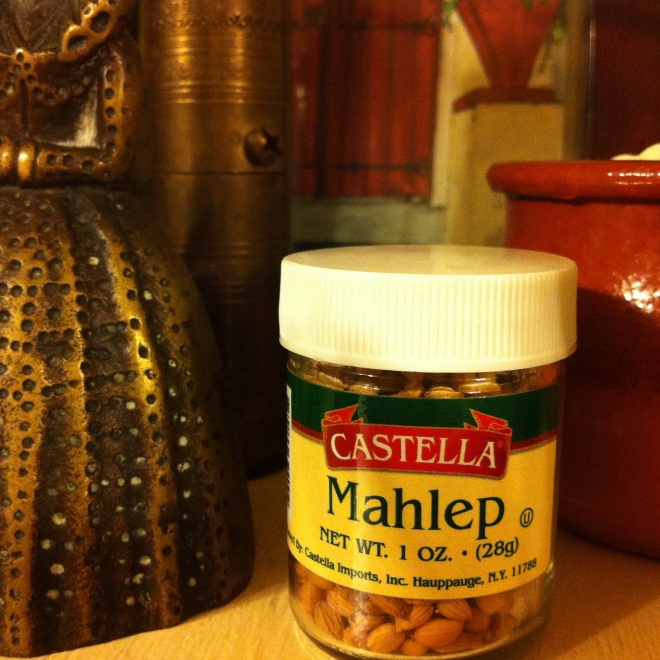 The syrup will later be strained so there’s no right or wrong here.  Butter is now used more frequently between the sheets of phyllo whereas in the past, the fat of choice was high-grade, local olive oil.  As I mentioned, different combinations of nuts can, and are, used.  Walnuts, pistachios, hazelnuts, almonds, even pecans can be gently layered in the sheets of dough, and all taste great.  I hope you won’t let phyllo intimidate or torture you.  Just follow a couple of simple rules and you’ll be golden.  Like the Baklava I’m sure you’ll make.  Oh, and let me be so bold to add, it’s better the next day. 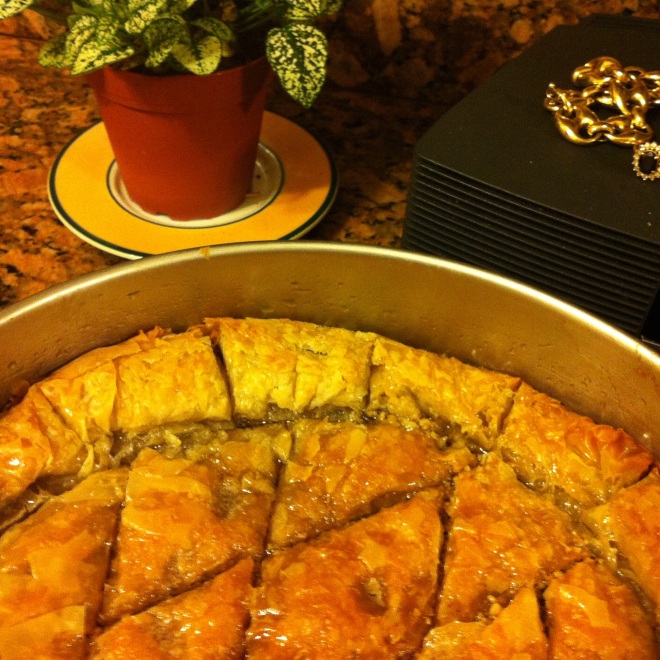