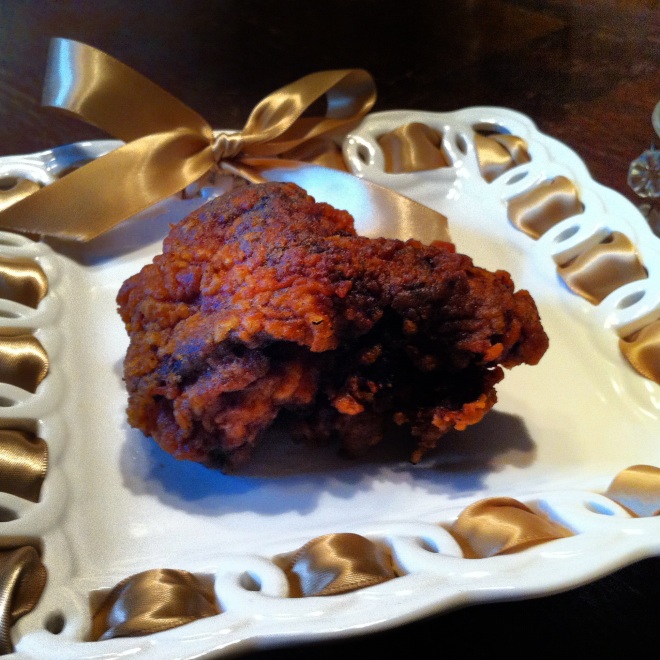 I know it’s hard to make out but to the left of the photograph one can see Papa Pepe’s pistola, his pistol, dangling from his holster.

I’m just going to talk you through this.  I’m sorry but Fried Chicken is like a running conversation to me.  I can’t do bullets.  Clean your chicken pieces and, leaving the skin on, trim any bits of excess fat.  Mix buttermilk with 2 or three tablespoons of Tony Chachere or spice mix of your choosing.  If you like heat add some now, cayenne is great. Place the chicken pieces in a shallow dish and pour mixture over making sure the pieces are well coated.  Place in refrigerator and let marinate for as long as possible, overnight is great.  When ready to start frying set up an assembly line.  Place a colander in a deep bowl and drain the chicken in the colander.  Season chicken liberally with spice mix, still allowing it to drain.  I put that to my left.  In a large bowl or glass dish mix 3 or 4 cups of flour with a couple of tablespoons of spice mix.  That I position in front of me.   To my right I have a large jelly roll pan or sheet pan covered with cooling racks, the same racks you use to cool your cookies.  Tin foil is okay in lieu of the racks.  In a cast iron skillet or heavy pan add oil or shortening until it comes up about 1/3 of an inch high on the side of the pan.  Heat to 325° but no higher.  I use a candy thermometer.  It’s a little hotter than medium.  While the pan and oil are heating up the I dredge the chicken.  My left hand is my wet hand and my right is my dry hand.  With my left hand I place one piece of chicken in the flour mixture and using my right I cover the piece with flour, turning and patting to make sure each piece is completely floured.  Shake the excess flour off then put it on the rack or tin foil.  You get a better scald on the chicken if it drys a bit.  When the oil has reached 325° I place the thighs in the middle of the pan skin side down.  They take longer to cook and the middle is the hottest.  Legs, wings, breasts go on the sides.  If I have a lot of chicken to fry I often use two frying pans.  But don’t crowd the pan.  No more than 4 or 5 pieces at a time depending on the size of your pan.  Fry chicken 10-12 minutes per side.  Keep your eye on the heat adjusting so the four doesn’t burn but making sure the chicken is cooked all the way through.  When the chicken is done let it drain on cooling racks over a sheet pan.  DO NOT drain on paper towels.  You’ll get soggy chicken and after all that work…well, that would just be a shame!