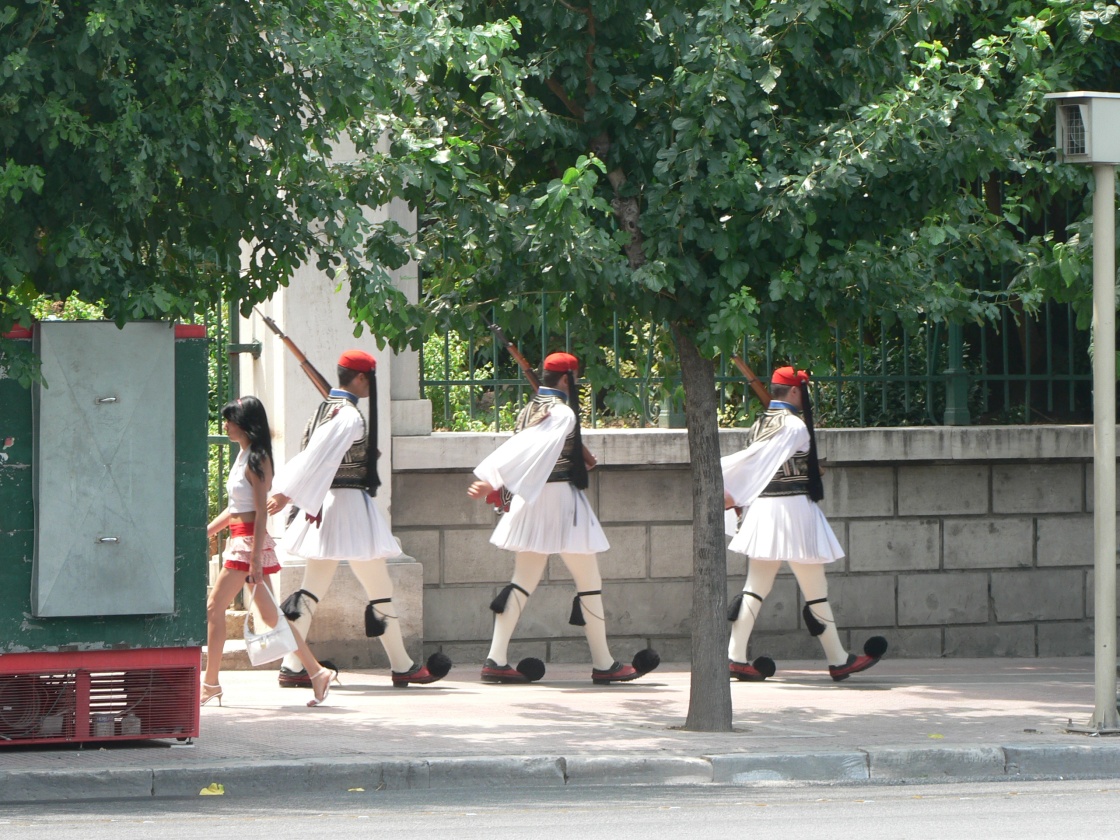 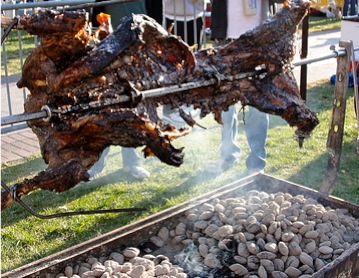 October 26th is Jimmy’s and James’ name day.  In the Greek Orthodox Church that is as important as your birthday if not more.  A person’s name day is the feast day of the saint for whom he or she was named and reason for serious celebration.  And so October 26th is a special day for all the Dimitri’s and Dimitra’s of the world.  I, on the other hand, am sick as a dog, stuck in bed with a high fever and with only enough energy to try to breathe.  As I lie here I allow my mind to wander freely, my memories take me back to the first time we took James to Greece.  Jim had never contacted his family on any of our earlier trips and I asked him if he was going to on this one.  “We’ll see.” was one of his more gentle responses.  It ran the gamut all the way to a heated, “Dammit!  You don’t know my family!  If they know we’re there they’ll NEVER leave us alone!”  “Okay!  Okay!”, I thought.  “I’m just asking!”  That first trip with James was also my first trip to the island of Lesvos.  It was also the first time we invited James’ cousin Elizabeth to join us.  The two cousins have always had a great relationship and not only would her perspective be appreciated but James would now have someone to hang out with now that they no longer fought over the blue popsicle.  My sister, Cynthia, kept repeating her instructions to me.  “Chicken.  You CANNOT take your eyes off those children for one moment.  DO YOU HEAR ME?”  In the days leading up to our departure it became her mantra.  We left without a hitch and spent a wonderful week in Athens, making friends with the hotel staff, discovering new dishes and soaking in all that the Acropolis has to offer…which is quite a bit! We spent countless hours in the big museums and patted ourselves on the backs for having the foresight to bring Elizabeth.  It was more than once we heard James mutter, “Mama.  You’ve seen one 570 BC pediment, you’ve seen ’em all.”  We took a day trip to the island of Aegina…we had a blast.  After an exhausting but fulfilling week on the mainland we left for the island of Lesvos, the island of Jim’s family.  We boarded a rather large ferry secure in the knowledge that we had nonsmoking space reserved for the four of us in the first class cabin.  I don’t know why but all the passengers were to stay below.  We weren’t allowed topside maybe because we were traveling at night.  But to say the trip was hideous is an understatement.  It lasted an eternity.  Everyone smoked, EVERYWHERE, including the nonsmoking sections.  Even the babies were smoking.  Well, maybe not the babies but there WAS a woman accompanying her father who was one step away from death.  He was lying on a gurney with an IV and oxygen.  He had that “death rattle”.  And just what do you think was dangling from his daughter’s fingers the entire ferry ride?  It was vile.  Positively vile.  We did, however, strike up a conversation with a terrific man who turned out to be world traveler and Greek blogger Matt Barrett.  On that initial trip we decided on our hotel stay based on his comments which we had read in his blog.  We have been staying at that same hotel, the Sunrise, ever since and consider the owners and many of the staff our good friends. We finally arrived on the island at two or three in the morning and took the last unoccupied taxi to a nearby hotel.  After a quick rest and breakfast we took off for our final destination, Molyvos.  Our rental car had been delivered to us, the young agent eschewing our offers to drive him back to his office.  He said it was a beautiful walk and that he enjoyed it greatly, but thank you very much.  And off he went.  I understood completely.  In the soft light of the morning the sweet town of Pirgi glowed, with it’s narrow streets and historic, colonial estates framed by huge, iron gates that looked liked frosting on a cake.  We loaded the car and started off with the excitement and anticipation of the beginning of an adventure heightened by the promise of a new day.  Up and down mountain roads, snaking hair pin turns and shuddering at the sheer drop from the side of the road to ravines and gorges below we finally made it to the Sunrise.

What a splendid escape.  The resort was  carved out of the hills each level of rooms terraced with a killer number of steps.  I made a mental note not to forget ANYTHING when going down to the pool!  Our days were filled with exploring the hotel, neighboring towns and local dishes.

We decided to go to Jimmy’s mother’s village, Morea, and check out the ancient Roman aqueduct.  We easily found the village, signage in Greece is pretty darned good, and started poking around on foot.  After taking in the aqueduct, the beautiful church where his parents had wed and the different Turkish watering holes for horses and travelers, Jimmy said, “Maybe I’ll see if we can find my favorite cousin.  I heard she moved back here from Athens.”  We went to a kiosk in the middle of the town square and after buying the children sweets he asked if there were any people around with the last name of “Hondrobilas”, his mother’s maiden name.  “Oh, sure”, the man replied, “just go down this street and it’ll be the fifth house on the left.”  Okay. We went to the fifth house on the left and knocked on the door.  And knocked.  And knocked.  Then pounded.  When we were just about to turn and leave, a very irritated young man came to the door and asked if he could help us.  Jimmy answered yes and explained that we were from America, that his family’s last name was Hondrobilas and would he know of anyone in town from that family or could he actually BE a family member.  The young man responded yes, reluctantly invited us in and invited us to sit down.  He was a third cousin and explained whom we really wanted to see was another cousin, Athena, and he left us to call her.  Jimmy and I sat quietly in the living room whispering vagaries to each other to break the stillness of the atmosphere.  While the cousin was talking on the phone in his rapid-fire Greek we heard a rustling from upstairs.  In unison we turned  to the staircase not believing what we saw.  With big eyes and jaws dropped we watched as the cousin’s daughter came downstairs.  She was the EXACT 16-year-old mirror image of Jimmy’s sister in Boston, Tina, (actually Athena).  The same high cheek bones, the same light blondish brown hair, THE SAME CLEAR AQUAMARINE EYES.  We were positively stunned!  As much as we tried to explain, the family just looked at us with complacent amusement and moved right on to the business at hand.  “Okay,” the cousin briskly started, “Athena’s going to meet you in the town square, just go back the way you came in.  Good bye.”  We shook hands, gave him our thanks and headed back to the town square which was just a stone’s throw away.

As we stood in the square, the kids chatting with each other, Jimmy and I took photographs of the lovely homes, the beautifully shuttered windows and the heavy, elaborately carved doors.  I slowly acknowledged a mounting clamor slowly creeping into my consciousness.  It began as just a low din and rose and rose to a small commotion.  As if in slow motion Jimmy and I both turned at the same time to see a crowd approaching us, dogs jumping and yipping about as if they knew something monumental was about to happen, the sea of villagers headed by a petite woman in a very cute linen outfit.  Well.  Everyone was talking a mile a minute and then the woman in the lead had her arms outstretched and Jimmy had his arms outstretched and they’re hugging and crying and smiling and crying.  It was, indeed, Jimmy’s favorite cousin, vivacious, slightly naughty, always laughing and smiling, Athena.

After all the runaway emotions were reined in we made plans to go to their house for dinner the following day.  We drove back to the hotel marveling over the fact that this reunion had taken place.   Jimmy thought back on his time with Athena’s father, his dearest uncle, walking the streets of Athens discussing different philosophers and choice authors.  Dinner the following evening was magical!  Athena had gathered all the family members  in addition to making a feast that just did not quit.  We met Athena’s equally generous brother, Dimitri, and his fabulous wife, Evangelia, along with their remarkable children.  Neither Athena nor Evangelia have sisters so they are to each other not only sisters-in-law but best friends… soul sisters.  Each a treasure to the other.  And now treasures to me.  James and Elizabeth met their cousins and disappeared through the narrow streets of the village, running and playing as if they had all known each other since birth.  We laughed and ate and drank until the wee hours.  Athena and her handsome husband, Yiorgos, (he looks just like Clark Gable), with Dimitri and Evangelia hosted us at countless seaside tavernas each one better than the former to remote all-night, tear it up, Greek parties taking place in the most unlikely, remote, never to be found again corners of the mountains.  We followed  Yiorgos in the car as there were no street lights and sometimes no streets only dirt roads which suddenly opened up to a parking lot shaded by thousand year old olive trees.  White lights had been strung from tree to tree, the local band was playing songs and their delighted audience was dancing, and clapping to the strains of the classic Greek music.  They were all brilliant celebrations of sheer love of life and joy.  Our Greek family has enriched our lives beyond belief and now we always… ALWAYS look forward to the phone call when we can say to Athena, “Tekanes, sister?  Eimaste etho!”  “We’re here!”

When there’s a reason to celebrate one needs roasted lamb.  This is an incredibly easy and wholly satisfying dish whether you prepare a leg of lamb or the entire animal.  To a good cup of olive oil mix in 1/2 cup fresh lemon juice, one head of garlic minced, a couple of heaping tablespoons of oregano, and a tablespoon or two of salt and pepper.  Mix all together and rub all over lamb.  Chill lamb with marinade in the refrigerator at least three or four hours but overnight is better.  Before cooking bring to room temperature.  Based on a 7 or 8 pound leg of lamb, boned, grill for 2-3 hours.  In the oven it can be roasted for 2-2 1/2 hours at 400° basting frequently.  Greeks eat their lamb well done but tender.  And there’s no reason you can’t throw some potatoes in with that meat either.  The lamb drippings will season those potatoes like none you’ve ever had before.  Enjoy!