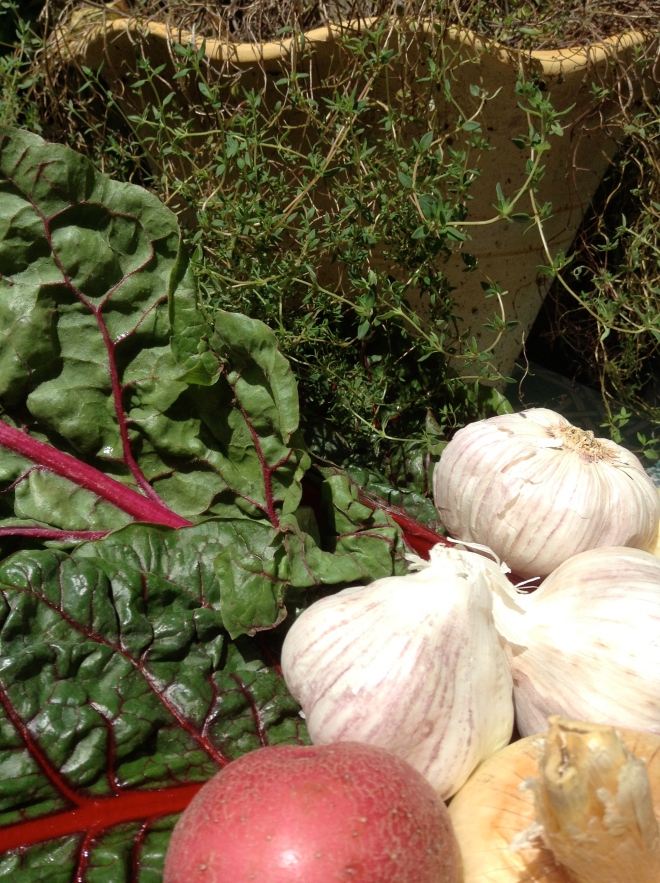 I’m preparing one of my father’s favorite meals for Father’s Day.  Swiss Chard with Cannellini Beans.  I picked the chard with great care; only the crispest and brightest leaves made it into MY basket.  My mind wandered to Dad as I chopped, peeled and washed.  At 90 years old he still is pretty great.  And growing up…well, he was a true sport.  He liked me and I liked him.  I remember when my older sister, Cynthia, and I were little, really little, Cynthia wasn’t even in kindergarten yet, how Dad would play with us when he got home from work.  He had just opened The Tack Room, a women’s clothing store on Las Olas Boulevard, and typically came home dead-dog tired and worried about whether or not the store would make it.  As he got out of his car and Cynthia and I came running.  “Daddy! Daddy! Daddy!  Can we play the chasing game?”, we’d scream.  And all of a sudden he would zig…then zag…and make a mad dash to the same palm tree  where we would follow with sheer delight and chase him around the trunk of the tree.  Round and round we ran, stretching out our hands in the hope of trapping him in our arms.  We never, ever caught that lean, lanky man.  Years later he would laugh and say, “Yeah, you girls weren’t very bright.  All you had to do was turn around while you were chasing me and you’d have caught me! But you didn’t…did you?”  No, Dad, we didn’t.  I thought about the time he came to my kindergarten class at Happyland.  Yes, that was the name of my school.  And, btw, it’s still there.  That was in the very early 60’s when men didn’t do certain things and kindergarten was one of them.  Anyway, I remember we were in the middle of snack-time, (i.e. cookies and juice, the juice being Hawaiian Punch). My teacher, I think it was Mrs. Hooker, who positively terrified me because I just knew she was related to Captain Hook, I swear, called me to the doorway of the snack room and informed me my father was there and needed to tell me something.  My heart soared!  Daddy was here?  To see me?  I whipped around the corner and there he was.  I remember this as if it was yesterday.  He had on a white Lacoste shirt with blue seersucker pants, a woven hemp-like belt and white, canvas boat shoes, no socks.  He was sunburned from the previous weekend we had spent at the beach.  He squatted down in from of me and with a sparkle in his eye and his special secretive smile he whispered to me, “Manima”, one of my many nicknames. Pronounced Mah-nee-muh, accent on the second syllable.  “You have a brand, new baby brother.”  I could not have cared less.  All I knew was that my handsome, darling father had come to see ME during the day AND in school.  Our father was not a demonstrative man.  He showed his affection by giving us nicknames and composing little poems and jingles about us.  He was highly uncomfortable dealing with our emotions.  I came down with a nasty case of chicken pox when I was a young girl of maybe four or five years old.  It happened to be the season when Lassie, google “heroic collie that ALWAYS saves that pain-in-the-neck boy, Timmy,  who was stupid enough to be sniffing around that old, abandoned mine”.  The program came on every Sunday night and at that time was a five or six episode story.  Apparently Lassie and her family had traveled from their home in Pleasantville or some other extremely boring, white bread place, to California for their vacation.  Somehow, Lassie had been separated from Timmy and his family.  In the season finale they were returning to Pleasantville WITHOUT Lassie.  I couldn’t bear it.  I just couldn’t bear it.  I remember sitting on Mama’s lap on my bed, burning up with fever just sobbing because Lassie was lost.  Poor Daddy.  He couldn’t stand to see us cry.    The next day he came home with a gift for me.  He NEVER did that.  He presented me with a large trunk.  It had shiny brass buckles.  I opened it and found the most exquisite doll.  She was meant for little girls who were either sick or bed ridden.  The trunk showcased drawer after drawer of items essential to a doll’s infirmary.  She had doll sized band aids, casts for arms and legs, crutches and slings.  She even had little pink stickers for chicken pox.  I loved her! In fact, she’s the only doll I didn’t play beauty parlor with so she still has all her hair and it’s not in a matted, shampooed mess.

He loved both peanut butter or liverwurst and Mom would mash around a huge lump of one of the two in the middle of two pieces of bread, tearing them in the process.  I didn’t.  I carefully covered an entire piece of bread with a thick but even layer of the wurst then blanket that with a crisp sheet of lettuce followed by a savory slice of onion or tomato.  His peanut butter sandwiches always had a light drizzle of honey or a sliced banana.  But I didn’t particularly care about making his lunches.  I’d forget to make them or put it off or just disappear to get out of it.  I should have known how grim Mama’s lunches were.  And I feel a bit shameful for being so self-centered.  Now I cook for him often and look forward to hearing the satisfied pleasure in his voice.  I know he’ll be surprised but happy when he sees this, his favorite dish.  Happy Father’s Day, Dad!  Tschüss! 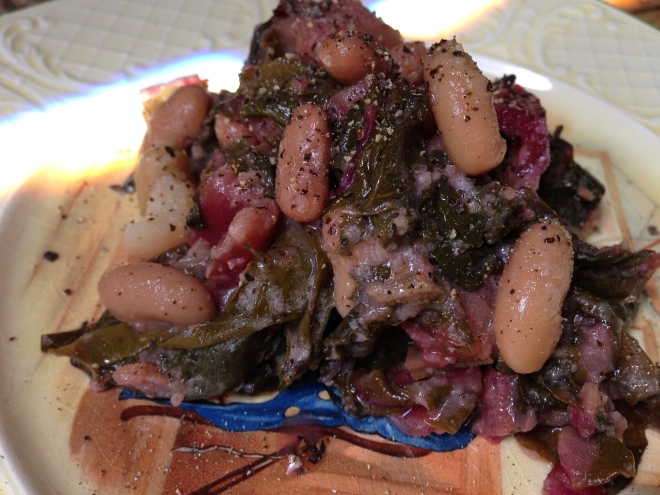