Yes, we had another birthday this past weekend.  James turned 22 and how that happened I can’t even begin to comprehend.  Suffice it to say he will always be my “Wainbow” from Mrs. “Shop’s” Pre-K class.  That’s supposed to be Rainbow and Mrs. Sharp  but when you’re 5 years old, well, some letters are just harder to pronounce than others.  As in so many homes the birthday person gets to pick the menu for their family party and James went Latino.  Roast pork Puerto Rican style, black beans and rice, big ass salad, and maduros, sweet, yellow plantains roasted to melting perfection.  And let’s don’t forget dessert.  We decided upon homemade Key Lime Pie AND, to gild the lily, Guava and Cream Cheese Flan.  Scary but true.  I had a lot of preparation and cooking ahead of me.  First things first I made a large slit actually separating the fat from the meat and then slathered the fat with a paste I had made out of garlic, oregano and salt.  Fat back in place, the pork was ready to hang out in the refrigerator and soak up the heady flavors until roasting time.  Next came the desserts.  Key Lime Pie.  I use the recipe from Joe’s Stone Crabs.  Tart and not too sweet, the pie is a no-fail every time.  And I double it as I like a deep dish Key Lime Pie.  As the pie cooled after it’s brief sojourn in the oven I moved on to the flan.  The preparation of flan always makes me a little skittish because the caramel sauce is just so, SO integral to the silkiness of the custard and sometimes it doesn’t come out quite right.  Mama’s flan was legendary.  It was the only dish she could make that was out of this world.  And hers always yielded plenty of syrup.  Thankfully, this one went without a hitch.  I tasted the custard, pink with guava and almost swooned.  I gave James a taste and he just rolled his eyes.  It’s crazy good!  I had placed the pork in a pyrex dish, tightly bundled in plastic wrap.  With a metal cooling rack carefully positioned on top of the pork shoulder I gently slid the foil wrapped flan on top.  Then I placed another cooling rack on top of the flan and the pie was ready to go in.  The cooling racks steady the dessert pans and I chose to put the pie on top of the flan so as not to compromise the crust or leave any unattractive marks on the pie filling.  All this was done on Friday to be served to the family on Sunday.  Early Sunday morning I took the pork out of the refrigerator to come to room temperature before roasting.  I made the black beans and rice and prepared the plantains just to the point of baking.  I bought them on Friday and they were kind of ripe but not ripe enough.  Not by a long shot.  I put the bag holding 12 plantains on the window sill to hasten the process.  I was a little worried.  But for naught!  The peels came right off and my knife slid right though them.  Their natural sweetness enhanced by my addition of rum and light brown sugar I set them aside wrapped in tin foil and ready for the oven. 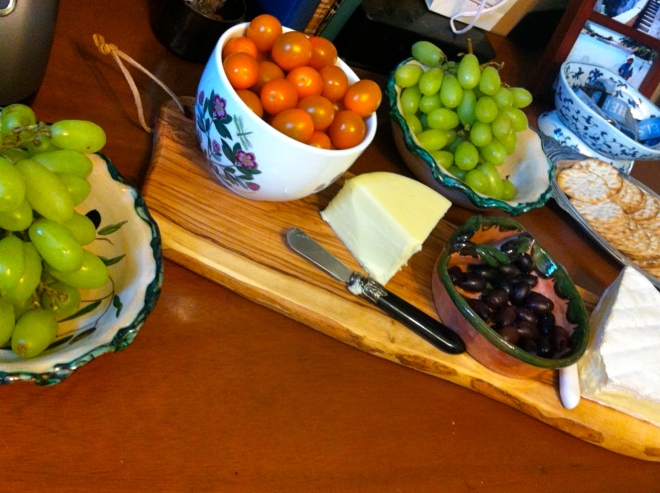 I still needed to set up our hors d’oeuvre.  On a back counter in the kitchen I set out a small bowl of organic, golden grape tomatoes.  On a two-foot long olive wood board I placed several different cheeses flanked by two more pretty bowls holding white, seedless grapes.  I did put out one box of water crackers but that was it.  And it was perfect!  The hit of the birthday dinner?  Hands down, the plantains.  The lowly, starchy fruit loved by jibaros everywhere slid into home plate with a buttered rum homer!  They’re addictive, sweet and satisfying so be careful.  It’s a slippery slope with them.  But once a year is fine. Buen provecho!

I always allow one plantain per person and then throw in a few extra.  The plantains are so good that guests usually help themselves to a little bit more, maybe just one more bite…they’re good looking, sexy and can be served as a side, as I did, or as dessert over vanilla ice cream.  I would be UN.DONE. if I had a bowl of that in front of me!  They can be prepared a few hours in advance of roasting and the preparation is about as simple as it gets.  Sweet plantains are quite rich so pace yourselves!