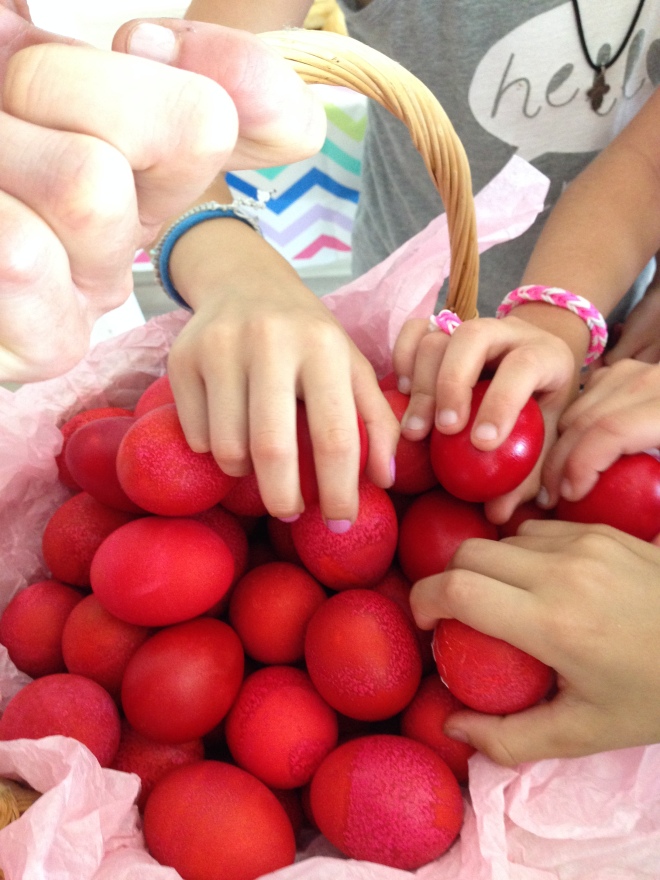 Xristos Anesti, everyone!  This past weekend was Orthodox Christian Easter and for the first time in a very, VERY long time I wasn’t cooking.  We had accepted the gracious invitation of a family we’ve known for many years from the Greek church.  The bulk of the cooking had been taken off my shoulders!  I decided to bake my sweet potato bread but instead of loaves I would shape the bread into rolls.  My thought was a faintly sweet, tender bite of bread would be a delight with salty, garlicky lamb.  I used my favorite recipe, Bill Neal’s, from his book “Biscuits, Sweetbreads and Sweet Potato Pie”.  I posted the recipe for the loaves back in…wow!  Three years ago.  Anyway, the recipe remains the same, however, I found in baking rolls rather than  loaves it is imperative that one use light-colored baking sheets.  I have two darker ones and no matter how I played with the positions of those pans and the temperature those rolls came out a tad bit darker on the bottom than I would have liked.  Dad will be eating the darker rolls for some time!  We arrived at the party with many kisses and hugs and the joyous salutations of “Xristos Anesti!” followed by the response of “Alithos Anesti!” resounding all around us.

The house was perfect. Open and spacious it sits on the water with a sparkling, inviting pool in the back.  The children played games and jumped in and out of the pool while the adults relaxed under an enormous tiki hut savoring cocktails and Greek music.  The ceiling fan under the fronds of the tiki hut not only kept us cool but seemed to waft the distinct aroma of garlic and lamb to tease us through the afternoon.  Most of the crowd there had observed Lent eating no meat at all so our hosts treated us to bits of Greek style grilled chicken and grilled sausage from Cyprus interspersed with ears of grilled corn on the cob redolent with Greek herbs and swathed with melted butter.  Oh, but it was heaven on earth!  Off in a shady corner was the guest of honor slowly turning on the spit, only making a sound when it’s juices hit the hot coals below it.  Yes.  It was a whole lamb.  Gorgeous and browned I had to hold myself back from trying to sneak a little crunchy corner.  But I tried, people, oh yes, I tried.  All I could do was almost burn my fingertips…and try to practice patience.

When at last it was ready two or three men hoisted the arm of the spit on their shoulders and carried the lamb off to be carved after it had rested for 15 minutes or so.  The ample dining room in the house held the table which almost groaned under the weight of all the homemade dishes.  Emerald green salads lightly tossed with fresh lemon juice and good Greek olive oil sparkled like jewels.  Platters of crisp, golden Greek style potatoes peeked out of lacy veils of oregano and black pepper.  The trays of Greek cheese and spinach pies in crisp, buttery phyllo flanked by bowls of cold, tart tsatziki  and feta went on forever. 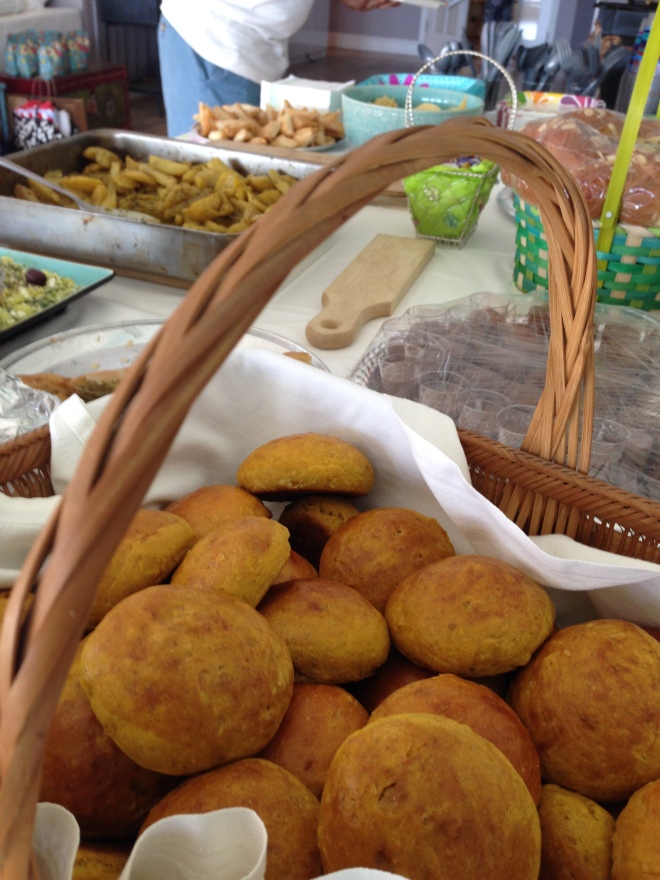 And my rolls didn’t look bad, if I do say so myself.  Dessert was, again, homemade.  Galaktoboureko, a creamy custard, pudding encased in a pillow of phyllo saturated with a light, sweet, sugar syrup.  I was delirious!  The table was glorious and splendid.  The day was positively magnificent.  We caught up with old friends and made new friends as well.  We are truly blessed!