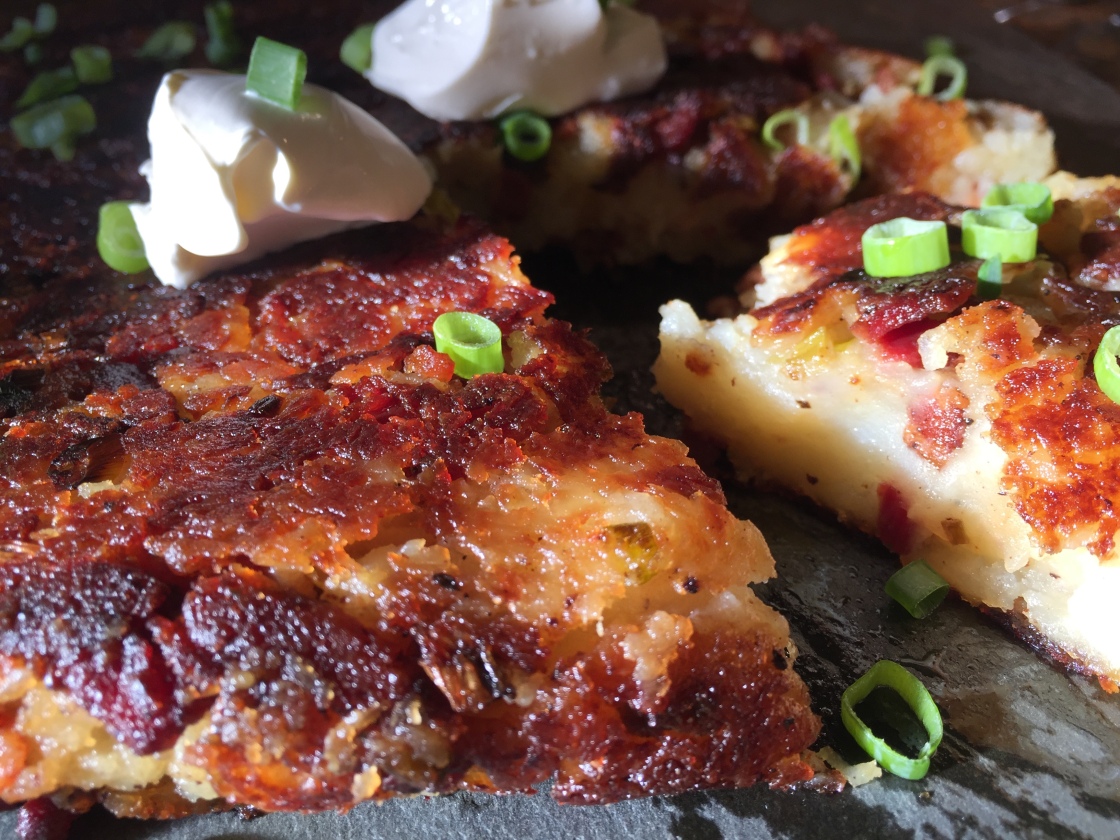 After a night of clubbing, dancing and partying, nothing is more welcome than a plate of straightforward carbs. Throw some high quality fat in the mix and we’ll be good to go.  Rosti, or Swiss potato cake is it.  I used to keep a large boiled potato in the refrigerator and prepare it all the time.  It seem like hundreds of years ago when I lived in Atlanta, that I would eventually make my way home at the end of some crazy night… well, you get the picture.  I got in late, okay?  I had a few different apartments during that time, each one lovely and charming with its own mind bending fusion of quirky, funky and downright bizarre neighbors.  One place was on Frederica Street, affectionately called “Fred” by my cronies and me, perched at the top of a hill.  This is back when Atlanta still had character, color and stories were being made.  It was some kinda fast livin’.  Anyway, across the street from my apartment lived the scariest looking guy you ever did see in what little kids would have called a haunted house if a child had ever walked down the street and seen the house.  Falling apart from top to bottom, it looked as though it should have been condemned.  Old tires, cement blocks and general crap was thrown anywhere and everywhere.  A few of the windows had been covered with tin foil.  It was dark and menacing, the cheap curtains hung on the remaining windows were always drawn and the flickering blue of a television set was the only light at night casting eerie shadows on his already freaky looking property.  Creepy.  Every now and again my neighbor friends, Lee and Desiree, and I would see a big, hefty man emerge, always wearing a black wife beater, dirty jeans stained with oil and black boots that had seen their better days.  Even in the dead of winter this was his uniform.  He sported an enormous handlebar mustache that spanned from ear to ear and wore his long, greasy hair slicked back, his gold hoop earring gleaming wickedly.  And he was ancient.  Had to have been at least 50!  Well, as it happened, my neighbors and I had spent the good part of an afternoon well into cocktails when we spied this ol’ monster of a man poking around in his front yard.  Filled with 101-proof liquid courage the three of us excitedly decided to cross the street, introduce ourselves and, maybe, make a new friend.  We took the jug o’ brown with us.  Over we went and when he saw us approaching he scowled, his face filled with distrust and irritation.  By then it was too late to turn back, so with plastered smiles on our faces we stuck out our hands, made our introductions and let the jug be seen.  Honey, when that man caught sight of that bottle his face lit up like a damn Christmas tree.  “Felix.”, he said sweetly, “Felix Kowalski.” I happily replied, “Well, Fee, it’s a pleasure to finally meet you!”  From that day forward he was known to us as “Fee” and although he never crossed the street and visited us, not once, we came and went, in and out of his house just as happy as you please.  He had become our friend.  I always made way too much food and regularly took him plates that he seemed to just suck down.  Although Fee was from New York’s Hell’s Kitchen neighborhood, I remember…Mott Street, that giant was a softie.  The man had adopted every cat in the area, fed them and welcomed them into his home.  On authority but off the record from others in the hood, he would sell anyone in need a joint…for $1.00.  But listen to this.  And this is what I loved about him.  Big, burly Fee was fully and unreservedly addicted to the “Smurfs” cartoon show.  The Smurfs!  Remember those little blue characters?  Yeah, well, he was like a little boy when that program came on.  He was up at all hours watching that show.  So when I came home from a night of partying, I’d start this dish and while the potatoes were browning in the pan I’d take a hot shower and, time I got out, flip them to brown on the other side.  Regardless of the time, Fee always answered his door with a smile on his face, eager to dig into some warm, homemade food.  This was one of his favorites.  Mine, too. 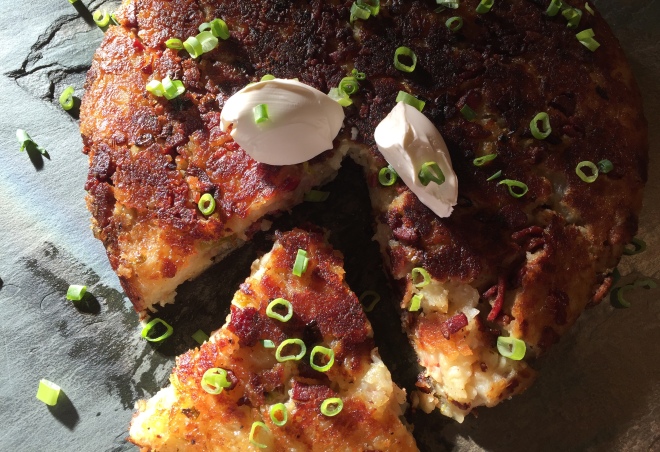 Rosti is really like a round hash brown cake and can be prepared with solely potatoes or with a few herbs and  meat.  The dish is served all over Switzerland and, as you can well imagine, every recipe is different.  Some grate their potatoes raw, others boil their potatoes, jackets on, then grate them. I lean towards the latter method, it’s always worked for me.  By boiling the whole potatoes you’re more likely to end up with a golden, crispy crust and a creamy, buttery inside, which is exactly what you want.  If you’re hesitant to try this, half the recipe and start with a small, non-stick skillet, way easier to flip.  It’s a great winter side for chicken and meats or even as an entrée with a salad.