Most people think of Saint Patrick’s day when the 17th of March rolls around but I’m reminded of my older sister, Cynthia’s, wedding anniversary.  Almost 40 years ago I was working in Puerto Rico with Delta Airlines and  being away from home had missed all the wedding planning and preparations.  Unable to leave work until the afternoon of the rehearsal dinner, I flew into Fort Lauderdale in time for the rehearsal dinner after-party which I was hosting.  This was almost 40 years ago, when tropical drinks were thought of as exotic and slightly dangerous.  My post-dinner party was to be a Puerto Rican pina colada celebration and I arrived well prepared.  My suitcase was loaded with small cans of Coco Lopez cream of coconut, a product almost unknown here in south Florida at the time, my blender and a blender I had borrowed from a friend.  I had boarded the flight with two handles of golden Puerto Rican rum…one in each hand.  My only instructions for Mama were to stock up on ice, pineapple juice and limes.  Knowing my flight would touch down at about the same time the dessert course was being served I had told Mama I would take a cab to the house; there was no need to send someone to fetch me.  The taxi driver helped me to the front door with all my goodies.  The house was quiet.  I opened the front door and gaily called out, “Hi, everybody!  I’m home!”  My eyes swept the high ceilinged living room and quickly accessed the mood.   Mercy.   Every guest was sitting quietly…politely…ram rod straight.  I turned to my little brother and sister and murmured their orders.  They understood the tragedy of a flat party and the importance of their chores.  Within minutes we had salsa playing, both blenders whirred away offering up a frosty concoction to the waiting crystal goblets which were whisked out of the kitchen and served to the waiting guests.  My brother Tommy, sister Pamela and I happily buzzed about the kitchen mixing batch after batch of rum drinks while enjoying the laughter, cocktail chatter and music from the rest of the house.  We all had a delightful time.  The following day the weather was glorious, the bride was beautiful and glowing and the wedding was exquisite.  We had done our jobs and done them well.  All these years later I wish you a happy anniversary, Cynthia and Wash! 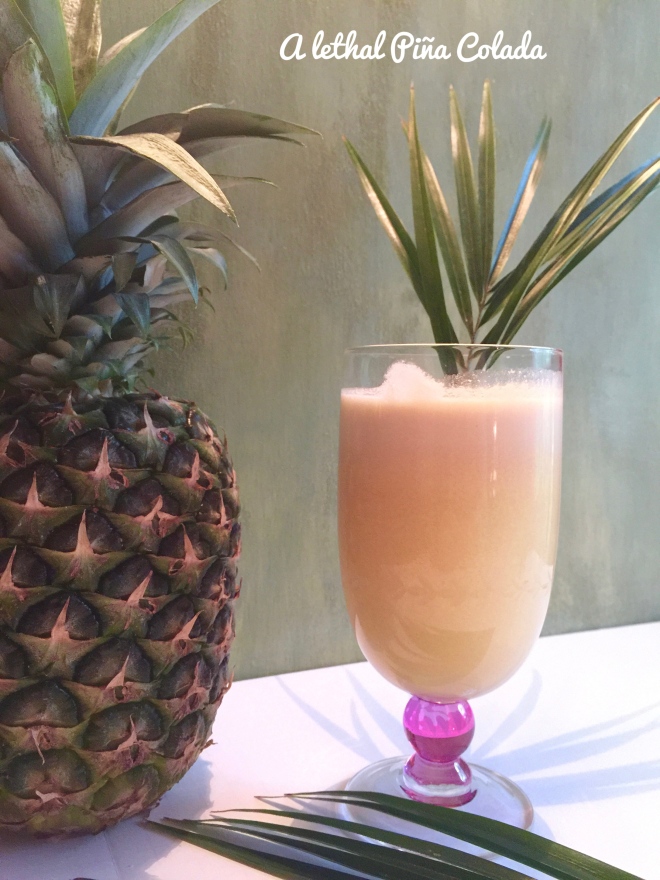 If you’ve never tried making this cocktail at home you must.  This pina colada may be served over ice or with the ice blended in as with a “slushy”.  Either way you’ll find, unlike many mixed and served in bars, hotels and restaurants, it’s not too sweet and much lighter than the aforementioned drinks.  It is best mixed in your largest pitcher or an empty plastic gallon jug then chilled.  If you plan on serving the iced “slushy” version, pack your blender half full of ice, pour in the already mixed drink then blend until liquified.  This recipe doubles or triples well.  Your cocktail will also inspire tropical trade winds when garnished with fresh pineapple spear.  But beware.  They go down quite easily!