All y’all Southerners out there know and love this casserole.  It’s rich with cream,  two kinds of cheese and lots of bacon.  However, the addition of collards and tomatoes shine brightly through to make this one damn fine dish.  I’m crazy about grits.  I could eat them every.single.day.  But I wasn’t raised on them.  Oh, no.  Remember, Mama couldn’t cook, she grew up in a world where nice girls didn’t cook…”we have help for that”, besides grits ain’t Puerto Rican.  No.  I was introduced to grits when I was in college in Macon, Georgia.  I was close with some girls in another sorority, I had pledged the wrong sorority but that’s neither here nor there, and consequently ran around with a few Phi Mu’s who are still incredibly close to my heart.  These are girls who grew up in Macon… Southern… utterly, thoroughly, to the core, Allman brothers, Fincher’s Bar-B-Q, ATO, SAE, fix your hair, put on lipstick, Southern.  I don’t remember what BettyGeorge’s daddy did, but Parks’ daddy was a physician and bred roses.  All the girls in Macon called Parks’ daddy the minute they were engaged, “Doctuh Popejoy? Hey! It’s Elizabeth Louise and I’m gettin’ married in May.  Do you think you might could do the roses for the weddin’?”  Every girl wanted Dr. Popejoy’s roses.  Anyway, the morning I first tasted grits, Parks was to pick me up in her car and then we were to go on to BettyGeorge’s house and from there probably to some day drinking party or something event I’ll never recall.  I always thought “George” was Betty’s first or middle name but years later I found out it was her last name, though, to me, she’ll ALWAYS be BettyGeorge, one name, first name.  Regardless, Parks pulled up to my dorm, tooted the horn and off we went.  We laughed and chatted as she flew through the twisted streets of Macon when suddenly we slowed, entered huge wrought gates and stopped in front of the most gorgeous, majestic estate encircled by enormous, ancient trees dripping with Spanish moss.  The windows were floor to ceiling; the front door double and very, very thick.  The house was positively exquisite in every possible way. Now, Gentle Reader, I had traveled a good bit.  I had seen many a stately home.  I had not just fallen off the turnip truck.  But this was something else.  My jaw actually dropped.  As Parks popped out of the driver’s side of the car I turned to her and asked in complete disbelief, “THIS is Betty George’s house??”  Parks whooped and laughed while announcing, “No! I just always wanted to do this!  C’mon…we gotta get outa here before we get caught for trespassing!”  Gosh, but that was one good-looking piece of property.  Two seconds later we pulled into BettyGeorge’s house, Park’s let herself in and we met BettyGeorge in the kitchen.  Her parents weren’t home so we flopped down as teenagers are wont to do while BettyGeorge poured us glasses of sweet tea in faceted glasses, none of that plastic stuff.  As I sat I spied a cast iron skillet on the stove with a few golden rectangles each about the size of a pack of cards still glistening with oil and I innocently asked, “What’s that?”  They both whirled around and replying, “That?  Are you kidding?  You can’t be serious.”  “No, really.  I mean, I don’t know.  What is it?”, I questioned, embarrassed that I, clearly, didn’t know what “that” was.  “Those are fried grits,  shug!  Haven’t you ever had ’em?”  “No!”, I emphatically answered, “My mother doesn’t cook.”  They shot each other that pathetic, “Oh, God. Poor li’l thang” look.  I didn’t care.  I’d gone my entire life hungry and I did not care.  Just explain it to me, okay?  You don’t have to feel sorry for me, only will you please fill me in?  And they did.  Both girls ever so patiently explained to me that all manner of dishes can be made from grits, whether they be left over from breakfast or not.   All manner of ingredients could be added to them from cheese to sausage to greens.  There were only two rules.  The first, and most important, never, ever prepare quick or instant grits.  Ever.  Just don’t do it.  It’s nasty.  Only old-fashioned, regular grits will do.   You WILL know the difference.  And number two.  Always, always, always stir the liquid to make a “tornado” while slowly pouring in the grits.  And there ya go.  I’m pretty certain those girls have absolutely no recollection of that morning in BettyGeorge’s kitchen,  but I do.  It was magic.  Southern magic.  Make this.  You’ll swoon. 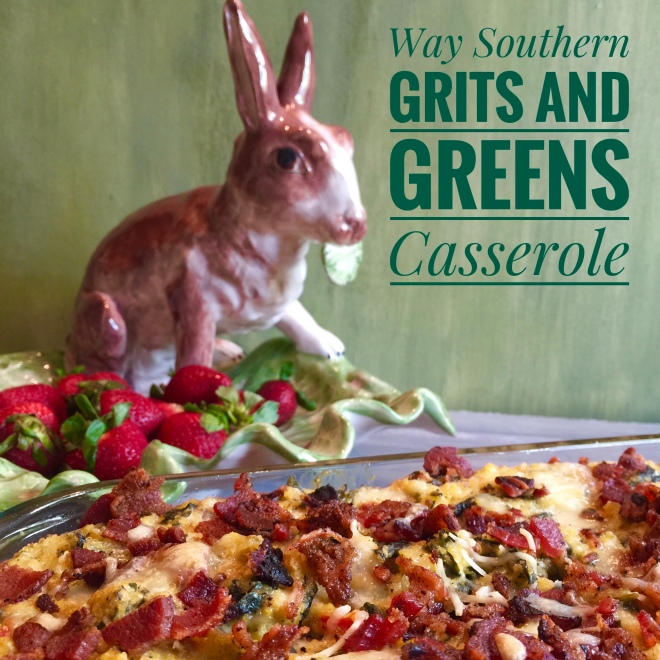 This casserole is beyond perfect for brunch or a special occasion.  It’s one of the dishes I’ll be serving this Easter Sunday.  It’s rich and gorgeous and everyone goes crazy over it.  All ingredients can be prepared in advance except the grits.  That said, cook up the grits before church, mix it all together, slap it in the oven and take off.  When you come home the casserole will be all warm and bubbly.  Btw, sliced spring onions scattered over the top right before serving are really great. 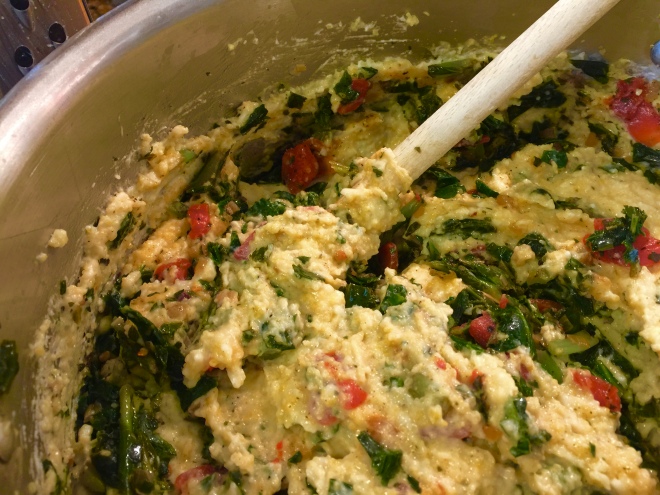