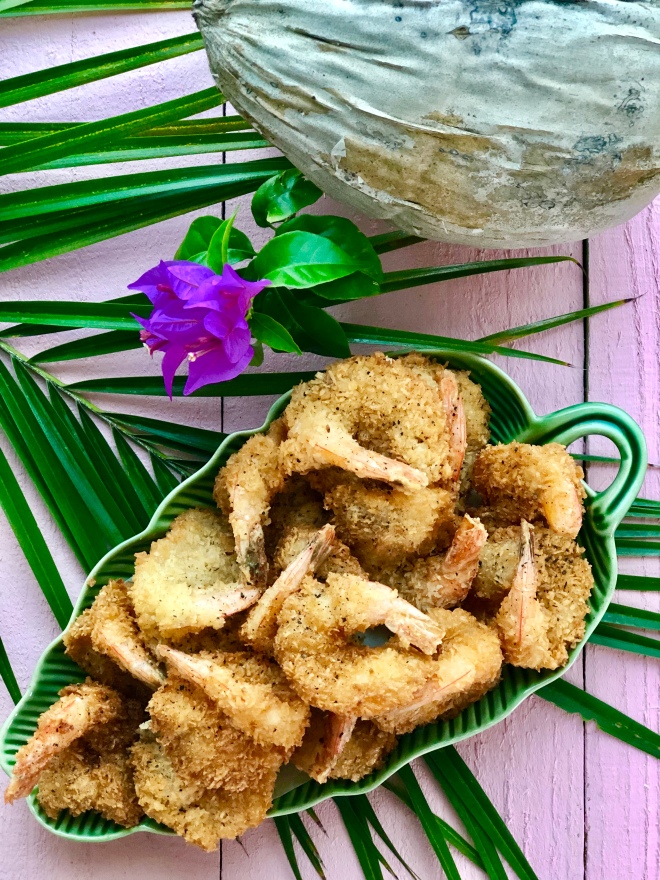 It’s never too early to think about Valentine’s Day. Never. In my older age I now know what I want for dinner…and what I don’t want. The days of a petite filet, baked potato and Caesar salad are so never more and not happening. I mean, really, does any girl want to get romantic and snuggly with a gut full of beef and potato? I think not. But how about a make-ahead shrimp dish? It’s a little high in calories but, hey, it’s once a year. It’s Valentine’s day (insert heart emoji). Coconut shrimp is light and sweet and spicy, if you want it to be. Everyone loves shrimp. My late father traveled extensively through Malaysia and Singapore and loved the foreign and flamboyant dishes of the region. Without fail, he regaled me with food stories upon his return. Some good…some not so good. I remember one trip in particular. He had spent two weeks traveling through the Far East working with colleagues in the tropical fish industry, devoting endless hours in the fish farms and rice paddies of rural towns and villages. I remember him saying the landscape was beyond magnificent, the people were simple but warm and welcoming, thrilled beyond belief that they could do the smallest thing for him. Towards the end of the trip, he found himself walking the short distance from his hotel to a local favorite restaurant for dinner with more tropical fish people. My father was always a short-cut, cut-through-here kind of guy and that night was no exception. As Dad approached the back of the restaurant he noticed two women squatting low, doing something with their hands. A rubber hose snaked about their bare feet, puddling the water which trickled out of the hose. When he was just about on top of them, he looked down to see what exactly what it was they were doing. With big smiles on their faces they held up giant prawns. Giant prawns they were cleaning and setting aside on the “sidewalk”…where their feet were…where dogs tinkled, people spat and garbage lay about. These were the prawns Dad had been dreaming about all damn day. These were the prawns he had been enjoying throughout his entire trip. He smiled, cut through the kitchen and sat down with his friends. Did he order the prawns? Oh, hell, yes. Hadn’t killed him yet.

Anyway, the shrimp we get here are headless and all cleaned up. This is a recipe he described to me. It’s incredibly straightforward, simple and the real deal. The larger the shrimp, the easier to assemble. I bought large shrimp with the tails and shells still intact.  Please try to buy wild-caught shrimp. Farm raised seafood of any kind is really not what you want. Wild-caught seafood is sweet and flavorful.  Makes all the difference in the world.  You want to take the sand line out and the shells off  while leaving the tails on. Get a cheap pair of hair or bang cutting scissors and cut through the back of the body stopping before the tail. The shell and legs come right off as does the sand line with a quick rinse in the sink under the faucet. The shrimp can be battered and coated with coconut days in advance then pulled out of the freezer, dropped in a pan of fiery hot oil and in seconds dinner is done. How easy is that? If you want to jazz it up, and I’m all for that!, hit the finished shrimp with a heavy shower of freshly cracked black pepper, chopped scallion and thinly sliced bird’s-eye chili pepper. Your Valentine’s Day dinner will be light, hot and sexy! 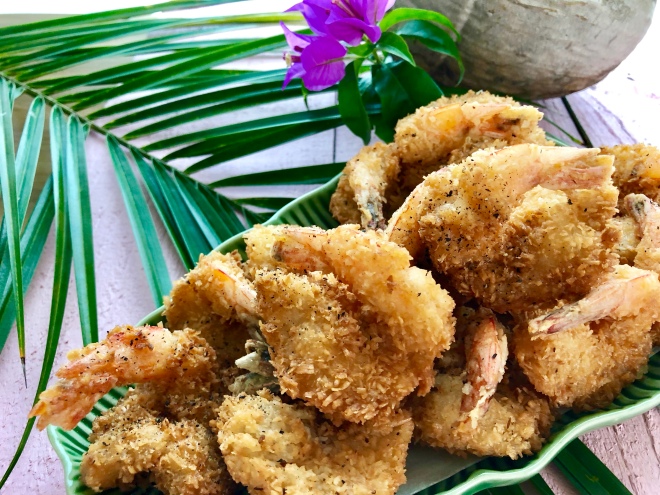