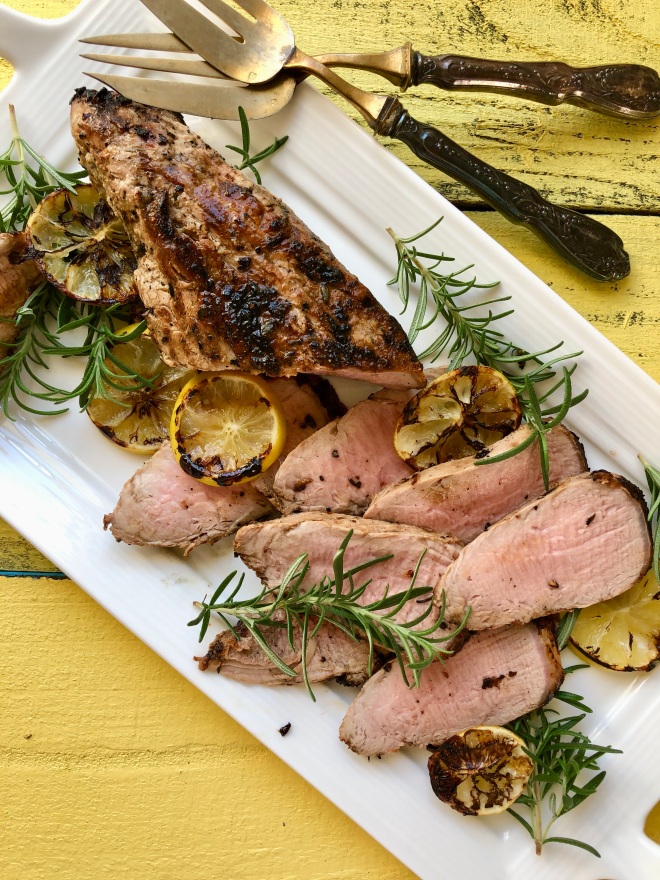 Years ago I pretty much overdosed on pork tenderloin.  We visited Costco often and took advantage of their reasonable prices for meat.  Week after week we enjoyed the lean tenderloins, marinated in that all too familiar combination of  soy sauce, Worcestershire sauce, garlic, ginger and dry mustard.  My husband, Jimmy, likes his meat rare and one night dinner came in, fresh off the grill, simply too bloody.  Shudder.  I could not take one bite.  And just like that I got so turned off of pork I didn’t serve pork tenderloins in this house for literally years.  Years!  The same thing happened to me growing up except instead of pork tenderloin it was ham.  Mama discovered these little, already prepared hams at the grocery store.  She bought one, it seemed to work out for her at dinner and, Lord, after that she never let go.  It seemed as though we had ham for dinner every other night.  Ugh.  So gross.  The hams were small and shaped like a bullet which had been cut in half… one end round and the other end flat.  They were bright pink in color.  If dinner was a disaster before… well, I had no idea it could get worse.  Mama didn’t know how to cook and didn’t care about learning.  Plus, as an intellectual, she had in interest in eating.  She ate to survive… to live.  Can you imagine?  Four kids and she cared not a whit about food.  As kids, we had everything.  Mama instilled in us a love of books, reading and learning.  She raised us in the Catholic church where all four of us grew to have deep faith.  She gave us the gift of travel and, well, all the advantages of an upper middle class upbringing.  What we didn’t have was much food.  When you are served wax beans and burnt zucchini with soylent green ham, you are perpetually hungry.  Needless to say, there were no picky eaters in our house.  If we were really hungry we’d eat anything.  Well, ‘most anything.  One by one, however, we put an end to dinners of the sketchy bullet ham.  We refused to swallow one more bite of the odious stuff no matter how hungry we were.  So Mama stopped buying it.  I have no idea how Daddy put up with all this since he was almost a vegetarian but I can tell you this. it felt like a miracle.  We had been saved.

This week I walked into a little market by the name of Publix and, you guessed it, pork tenderloins were on sale.  I thought to myself, “You know, we haven’t had these in years.  Maybe I’ll pick up a couple.  Lord knows, Jimmy’s got to be sick of chicken or fish and salad every darn night.’  Into my basket they went.  Rather than that beat soy sauce marinade I had used forever, I prepared a marinade used throughout Greece on all kinds of meat and fish.  It’s clean and light; healthful and bright with flavor.  The combination of rosemary, lemon and olive oil is perfection on grilled chicken, beef, fish and pork.  The rosemary is interchangeable with oregano, the much loved herb used on souvlaki.  There have been times when I was caught without any lemons in the house and I used fresh limes instead.  Yay for us because there is no difference in flavor.  That said, the marinade tastes best when the meat or fish is grilled.  Cooked stove top or in the oven simply doesn’t cut it as you get no crispy, charred bits and since pork tenderloin is so very lean, it’s super easy to over-cook.  I hope y’all try this quick grilling hack.  Paired with a big, fat salad, you’ll think it’s summer.