In my house, we quote often from movies, and I’m not even a big movie goer.  The earliest quote I remember, and we used it often, was “…Ain’t got no underwear!”, from the musical, “Hair”.  Mom and Dad saw the play in Palm Beach and I saw the movie.  Dad would sing that line to us anytime one of us would ask him for money.  I guess we were supposed to feel sorry for him, no underwear = no money?  Apparently it didn’t faze us a bit as we continually went back for more.  One of my favorite movies, if not my favorite, is “Who’s Afraid of Virginia Woolf?”  With a stellar cast of Elizabeth Taylor, Richard Burton, George Segal and Sandy Dennis, it is my #1, go-to, cheer me up movie.  I will frequently quote from the movie, “Never mix, never worry”, a line I happily chose to follow in high school.  I love that movie… it’s so brutal.  And visceral.  Pamela and I have adopted a line from “Beetlejuice”, a movie we watched over and over screaming and cackling with sheer delight over some really terrific lines.  Our favorite is most often and best used in public, drawing questioning looks from strangers that are now certain those two girls are really strange losers.  It is heard most often in Publix, Target and the Dixie, when one sister unexpectedly comes upon the other.  Low, harsh and guttural, one will call the other, “Hey! AIL-VUS!!”  The head of the startled sister being called will shoot up in recognition.  We always laugh as if it’s the very first time.  At our boy’s baseball games, she and I would yell, “Hey, battuh, battuh, battuh, battuh.  Suh-WING, battuh”, from the movie everyone adores, “Ferris Bueller’s Day Off”.  Sometimes when I say goodbye to my son, James, but only if he’s going out, not when he’s going back to school, I’ll yell as he goes through our gate, “His mama call ‘im Cassius Clay, I call ‘im Cassius Clay!” and I’m always rewarded with a blazing, white smile.   If James is going out for the evening, and in an exceptionally good mood, he might say to the dog, Pericles, “I have a date with LEEsa!”  And many an advice session has been wrapped up with a resounding, “Go on, honey. Take a chi-ance!”, again, from “Coming To America”.   So take a chance and try this rice pudding.  The same way your favorite movie makes you happy, this recipe won’t let you down.

This is an exquisite recipe from Puerto Rico, rich in spices, smooth with coconut milk and warm in comfort and steadfastness.  We fall back on it because it says the right thing to us.  It does the right thing for us.  It will fill part of the black hole.  It’s home with an offbeat twist.  All the ingredients are found at the grocery store and, lagniappe, it’s a walk away kind of recipe.  It just knows what to do and how to do it.  This is a rice pudding, cooked in coconut milk in lieu of whole milk.  Replacing vanilla, are whole cloves, cinnamon sticks, freshly bruised ginger and star anise.  We’re not in Kansas anymore.  Trust me.  It’s unbelievably satisfying! 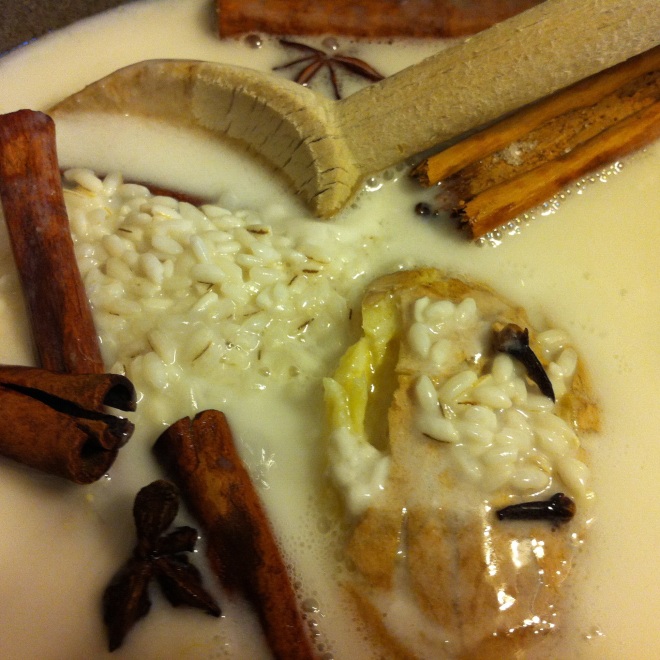