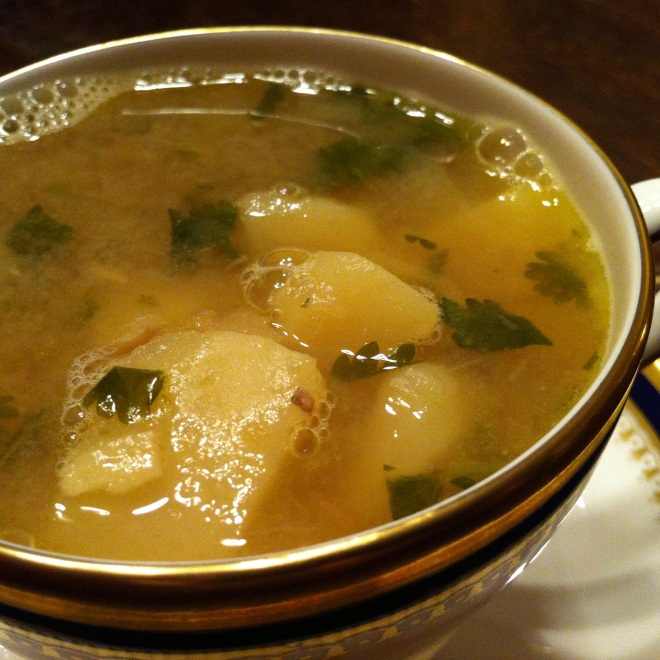 In Jamaica They Call It “Fish Tea”

WOW.  I just made the most outrageous, EASY, and fast, fish soup!  I’m trying to cool down with an ice-cold, crisp Pinot Grigio.  And, thankfully, it’s working.   It rained a bit today, and although the temperature dropped a stunning 4 degrees, I’m down for soup.  But I didn’t want some cook-all-day, roiling, thick, stew thing.  This is what I want… a gorgeously colored fish soup, always light and incredibly savory.  Dad gets a beautiful fish soup just about every Saturday at the Swap Shop, it’s so darned good but so darned expensive.  $12.00 for a cup.  Are you kidding?  Kiss my lily, white ass.  I looked all through my cookbooks for different recipes but they all did the “fish stock” thing.  I didn’t have any made or frozen and I just didn’t want to kill myself making it.  It’s fish soup, dammit, fish soup.  “I’m Gumby, dammit! Gumby”.  Well, that’s how I felt.  Anyway, I wanted something rich in flavor, but at the same time, light and pretty.  Apparently I wanted it all.  And guess what?  Through hard work and diligence I got it.  I started with a good knob of butter, maybe 2 or 3 tablespoons, and a good splash of olive oil in a medium hot dutch oven/stock pot.  To that I added an enormous onion that I had finely chopped and when it had cooked down, soft and clear, I added 7 or 8 finely chopped garlic cloves.  My feeling is, if I don’t have a good seafood stock then I need to unquestionably produce a broth that is strong, luxurious and full-bodied.  And I did.  After the garlic had softened sufficiently, I heightened the flavor by adding three large, peeled and cubed  red-skinned boiling potatoes, two whole scotch bonnet peppers, and a large bunch of fresh cilantro, washed and finely chopped.  We enjoy a lot of heat in our food and although scotch bonnets are small, they do pack a considerable amount of heat.  Fair warning!  I also threw in a good measure of salt and freshly ground pepper.  Actually, I added more than I usually would as the potatoes will soak up a lot of the salt; they need it to bring out their own flavor.  The shells of the shrimp had been saved and loosely wrapped into a bundle with cheese cloth and into the pot that went.  I found some saffron and tossed a few threads into the mix.  A little color is always good.  I chopped and included another onion to deepen the taste.  I also added a healthy glass of Pinot Grigio although a good chardonnay is lovely, too .  To the juice of four lemons I added six cups of water and into the pot that went. I brought it up to a good simmer and covered it.  I had set aside a large bowl with two pounds of shelled and cleaned shrimp and a couple of pounds of cod fillets cut into small cubes.  After poking around on the computer and watching a little junky daytime television with Jimmy, essentially passing the time, I tasted the broth to see what it needed.  Just a little salt and pepper.  After removing the bundle of shrimp shells I added the seafood and another handful of washed, chopped cilantro, to brighten the pot.  And I turned up the heat, just enough to cook the fish but not toughen it.  Two minutes later… voila.  It was gorgeous!  Just the right amount of heat, citrus and aromatics.  Even Jimmy liked it and he hates soup.  I think snapper, dolphin or wahoo would be outrageous in this and, of course, lime in place of lemon would be just fine.  Lemon grass would be lovely as would some marjoram.  Play around with it or focus on the flavor YOU like.  If you like the anise flavor use fennel in place of cilantro and add  a splash of Pernod.  I few chopped tomatoes might be nice.  And I ever so carefully took the scotch bonnets out and discarded them.  Soup is a luxury to me so if there’s any inclination to prepare it, I’m all in.  This is a fine soup, delicate and light, still satisfying and potent.  In MY kingdom, this would be the consummate meal if served in an individual, footed soup bowl in my formal porcelain pattern.  Would that it were.  Enjoy!