When I first tried giving James cornbread he was three years old and decidedly not a fan.  I included cheese in the recipe but he was not to be fooled.  All manner of changes were made to the recipe but to no avail.  Then one day I asked, “Jamesy, would you like some Johnny cake?”  Johnny cake is usually baked on a griddle, flat and thin.  I didn’t even have to do that.  I baked up the usual cornbread in my cast iron skillet and he scarfed it down.  He was sold.  My boy had heard the word “cake”.  That’s all it took.  Don’t you wish all eating problems could be solved so easily? James has since grown into a young man who is confident in the kitchen and more than happy to eat Mama’s spicier version of cornbread.  This recipe is roll-your-eyes delicious.  By baking it in a pre-heated iron skillet the bottom of the cornbread becomes crispy and the flavor of the cornmeal is heightened.  I’m fully aware the addition of sugar in cornbread is individual and also more common up North.  However, in the south it’s just not done by us old timers, at least not this one.  Corn is naturally sweet…there’s no need to add sugar.  But scallions and jalapenos are always welcome in cornbread.  It bakes up so beautifully and pairs well with so much.  Can’t have collards without cornbread.  Or chili.  Served with fish chowder or southern BBQ, cornbread is tradition .  Both black eyed peas and tortilla soup demand a healthy wedge.  Quite simply, there’s nothing like cornbread crumbled over a small bowl of cold buttermilk.  Now THAT’S southern!

Simple, fast and cheap, this recipe will become a family favorite.  Although 1/2 cup of chopped jalapenos seems like a lot, the peppers lose quite a bit of their heat during the baking process.  However, feel free to cut back on them if you’re not crazy about heat or you’re feeding little ones.  If you don’t have a cast iron skillet I suggest you save this recipe until you do have one.  It just won’t crisp up and will be a huge disappointment.  Most importantly, don’t forget to be super careful about grasping the handle of the skillet while moving it in and out of the oven.  It’ll be screaming hot so make sure you have several dry kitchens towels available to make maneuvering easy. 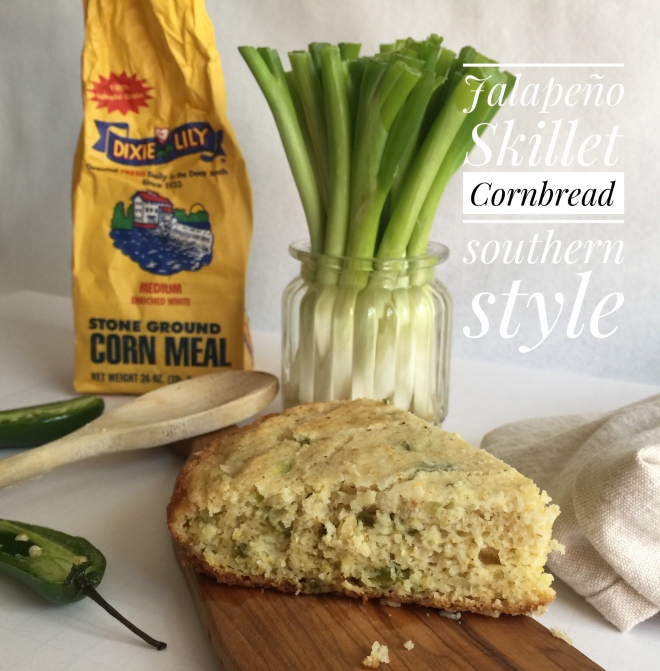